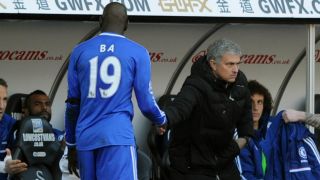 The Senegal international joined the Blues in January 2013 after successful spells at West Ham and Newcastle, scoring six goals in 22 appearances under Rafael Benitez including a memorable volley against Manchester United in the FA Cup.

However, the return of Jose Mourinho as Chelsea manager that summer didn’t appear to bode well for Ba, with Samuel Eto’o’s arrival from Anzhi Makhachkala expected to restrict his opportunities at Stamford Bridge.

As a result, London rivals Arsenal prepared a deadline day loan swoop for the former Rouen and Hoffenheim marksman, but ultimately Mourinho was unwilling to lend a hand to arch enemy Arsene Wenger.

SUMMER SALE Just £9.99 for the first six months with a FFT subscription

Speaking in the August 2020 issue of FourFourTwo – out now in shops and available online with free delivery – Ba recalls, “I was really close [to joining Arsenal]. I was at my house in Paris, having a day off, when I got a phone call from Arsene Wenger – he asked if I’d come back to London for a medical.

“I woke up at 9am on transfer deadline day, jumped on a train, got to London, but then it never happened. Arsenal made a couple of signings on the same day [Mesut Özil and Emiliano Viviano] and Mourinho chose to block the deal, as he didn’t want to help make one of Chelsea’s competitors stronger.”

Ba started only five Premier League games in 2013/14 but knuckled down and made positive contributions as a substitute, netting five goals off the bench including a late strike against Paris Saint-Germain that sent Chelsea into the Champions League semi-finals – a moment he still cherishes six years later.

“Being a young kid from the hood in Paris, growing up in poverty and then scoring the goal that took Chelsea to the Champions League semi-finals, that felt like a great achievement,” he continues.

“I had to find a way of dealing with not starting matches. But when you don’t play and you’re surrounded by players who do, the negativity comes. Near the end of that season, I decided to stop moaning, work hard until the season was done, then move on. When I stopped complaining, I started to score and play more.

“I remember having a chat with Mourinho once the season was finished, when he asked me to stay for another year. But I had already decided to go.”

Read the full chat with Demba Ba in the August 2020 issue of FourFourTwo – featuring an exclusive interview with Arsenal great Dennis Bergkamp. We also remember more era-defining icons, ask Djibril Cissé your questions, hear the confessions of Nile Ranger, remember when Celtic halted Ranger’s charge for 10 titles in a row, speak to Bayern Munich’s Joshua Kimmich, mourn Atalanta’s season of muted celebrations and much more. Grab a copy in shops or online!