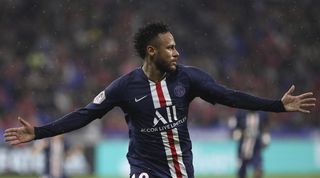 Ander Herrera says he is enjoying the chance to play alongside Neymar at PSG.

The former Manchester United midfielder swapped Old Trafford for the Parc des Princes when he became a free agent this summer.

Neymar wanted to leave the French capital during the same transfer window, but neither Barcelona nor Real Madrid were able to prise him away.

The Brazil international was booed by PSG supporters on his first appearance of the season last weekend, only for the forward to score a sensational winning goal against Strasbourg in second-half stoppage time.

Neymar was on target again on Sunday, finding the net in the 88th minute to give Thomas Tuchel’s team a 1-0 victory over Lyon.

And Herrera has praised the former Barcelona man and tipped him to be named the world’s best footballer within the next two seasons.

“I'm delighted to play with Neymar. I will not talk about his transfer window,” the Spaniard said following Sunday’s success at the Parc Olympique Lyonnais.

"Now, Neymar is with us. He is a fantastic player who can be a Ballon d'Or winner this season, in a year, in two years.

“We are very happy. I hope he can play like that all season.”

PSG’s win moved them three points clear at the top of Ligue 1, and they have already amassed seven more points than Lyon – the team many expected to push them closest this term.

But Herrera dismissed suggestions that PSG already have one hand on the title at such an early stage of the campaign.

“No, there are only six matches. I just saw the table. There is Rennes, Angers, Marseille,” he said. “We respect a lot of teams and all opponents. We will always play with respect.”

PSG will attempt to increase their lead at the top of the table when Stade de Reims visit the Parc des Princes on Wednesday.