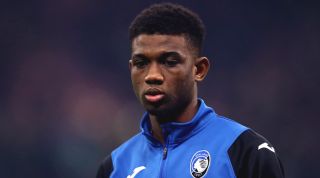 Manchester United have been searching for a winger throughout the summer transfer window with Jadon Sancho as their top target - but they look set to move for another exciting young talent instead.

Amad Traore from Atalanta has emerged as a target that Ole Gunnar Solskjaer is prepared to wait until the new year to sign for around £27m. United would have signed him sooner but for visa issues this window.

Traore came through the youth system at La Dea, making his league debut last season in a 7-1 win against Udinese. He only had to wait four minutes for his first goal for Atalanta and became the first player born in 2002 to score in the Italian top flight.

The Ivory Coast-born player is capable of using both feet and devastating in transition. He would be a worthy deputy to either Mason Greenwood on the right or Marcus Rashford on the opposite flank, with time to grow and develop as a player.

One of Traore's key attributes - his vision - could well provide useful too. United have a lot of players capable of scoring in the final third, with Pogba, Rashford and Fernandes tasked with the chance creation. Another forward in the form of Traore would help to chip in numbers.

Traore was all set to join Parma on loan earlier in the window. Since signing Valentin Mihaila, however, it now looks as if Traore will to stay at Atalanta until January.

United would love to get Traore signed before criteria changes on signing young players post-Brexit. Given that the UK will follow EU rules up until January 31 2021, Manchester United have until then to move for scholars or professionals with an EU passport over the age of 16.

Traore's teammate at youth level, Dejan Kulusevski, left Atalanta for £30m after spending a season on loan at Parma. Similar is expected from Traore, who will command a big fee for his services, despite little more than half an hour of Serie A action.