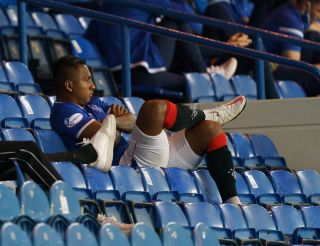 Steven Gerrard has warned Alfredo Morelos his goalscoring reputation counts for nothing now that he does not have to rely solely on the Colombian to lead Rangers’ attack.

The Lille target was left out of Gerrard’s squad entirely last week as new signings Kemar Roofe and Cedric Itten got the nod to start against Kilmarnock.

The decision to drop a man who has topped the Ibrox scoring charts in each of the last three seasons came in the wake of Gers’ decision to knock back a £16million bid from the French club.

After the 2-0 win – which saw Roofe open his Ibrox account – Gerrard questioned the 24-year-old’s focus, claiming it was an easy call to leave him out as he had taken “his eye off the ball”.

But the while the Light Blues boss has welcomed an improvement in attitude this week from Morelos, he says it may not be enough to earn the striker a recall against Hamilton on Saturday after praising the impact of his new strike force.

“I’ll make a decision on whether Alfredo is involved tomorrow later today,” said Gerrard on the eve of his side’s trip to the Foys Stadium. “What I will say is that we have definitely seen a difference in his application. He has re-focused himself into training well and worked hard this week.

“But I will wait until the end of today before deciding on whether he is included or not.

“As a manager you analyse your players on a daily basis and pick the ones you think are going to get you the right result.

“You don’t pick on name or reputation. You pick the players who are training hard, who are focused and who are listening, taking messages on board and going to give you the best chance for your team to get the right result.

“Last week we made a decision for the benefit of the team and the squad.

“Cedric and Kemar came in and I thought their application was really good, I was really happy with their performance considering it was their first starts. There was real positive signs with Kemar getting off the mark and Cedric’s work rate.

“What I will say is we’re in much better shape from an attacking point of view in terms of options. We’re not heavily reliant on one person. I’m hoping to have Jermain Defoe ready after the international break too so I welcome those tough decisions.”

Joe Aribo’s return from an ankle knock has also been delayed until after next month’s opening round of Nations League fixtures.

But Gerrard insists he has no plans to force his international stars to turn down caps and stay in Scotland because of the coronavirus crisis.

FIFA has relaxed call-up rules in light of Covid-19, meaning clubs do not have to release players if they are travelling to virus hotspots.

Ryan Jack and Jon McLaughlin are set to travel to the Czech Republic with Scotland even though it has now been taken off the UK’s travel exemption list, while Filip Helander, Glen Kamara, Jordan Jones, Steven Davis, Ianis Hagi and Borna Barisic are also due to jet across the continent for duty with their respective nations.

🏴󠁧󠁢󠁳󠁣󠁴󠁿 Goalkeeper Jon McLaughlin, midfielder Ryan Jack, and for the first time, goalkeeper Robby McCrorie have all been called up to the @ScotlandNT squad for their Nations League matches with Israel and the Czech Republic.— Rangers Football Club (@RangersFC) August 25, 2020

“It’s not a concern but it is something we’ve looked into,” said Gerrard, who welcomes back Leon Balogun to face Accies.

“The medical department and our doctor, Dr Mark Waller, has taken a lead on that in terms of the communications with countries and borders for decisions.

“I think we’ve got to trust our players that they will go to and from as safely as possible and continue to follow the rules.

“We want our players to go and represent their countries. We’re proud to release them.

“We don’t expect any complications when they return because we expect them to be tested while they are away at the right times and follow the rules so they can return safely and come back into our bubble.”