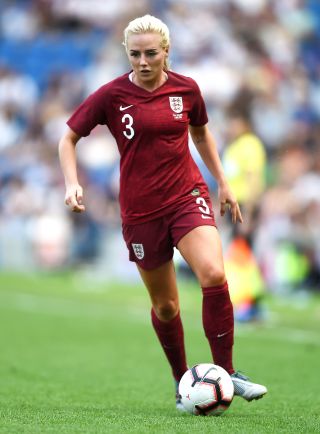 Manchester City have announced the signing of England left-back Alex Greenwood on a three-year deal.

The 27-year-old arrives at City after her contract at Lyon expired this summer.

Greenwood spent one season with the French side, during which she won the Champions League plus the domestic league title and cup, having previously been captain at Manchester United.

She has played 46 times for England, including at the last two World Cups and Euro 2017, each of which saw the Lionesses reach the semi-finals.

Greenwood said on mancity.com: “I’m so excited to get going – it’s been a crazy and unforgettable few weeks, but I just can’t wait to get started and bring that winning feeling to City.

“I’ve learned so much about myself over the past 15 months by living away from home and in a different culture and environment, but it’s given me so much time to develop both personally and as a player.

“Now is the time for a new challenge, though, and having experienced such a successful campaign last season, when you get that taste for a winning mentality, it’s addictive and I just want to continue that with City.”

City boss Gareth Taylor said: “We’re delighted to have added Alex to our already strong squad ahead of the new season.

“She is a proven England international who will fit right into the group we have here at City, while she has also been involved in a number of successes recently to add accolades to her already impressive career so far.

“She’s a very ambitious player and we’re looking forward to hopefully enjoying more success together in the coming seasons.”