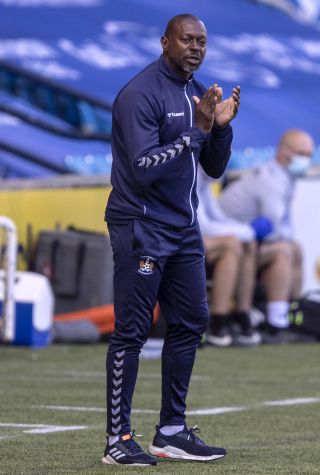 Kilmarnock boss Alex Dyer insists there were some positives to take from the 3-0 Betfred Cup defeat at home to Dunfermline.

Dyer had six first-team players back available for the visit of Stevie Crawford’s side and he gave debuts to three 17-year-olds, Kenny Sloan, Euan Deveney and Steven Warnock, and 18-year-old Craig Ross as well as 35-year-old goalkeeper Colin Doyle, on loan from Hearts. Youngsters Josh Rennie, Michael Mullen, Keir Russell, Ross Smith and Fergus Dee got some game time after the break.

The Championship side opened the scoring in the 55th minute with a header from captain Euan Murray. Midfielder Fraser Murray, on loan from Hibernian, nodded in a second in the 72nd minute before delivering a stunning free-kick to clinch the win.

Dyer said: “It was positive seeing the guys get some minutes under their belts.

“I was able to bed in some of the youngsters. They did all right.

“It was a good night in that sense even though the result was not what we wanted. I learned a lot.

“The youngsters have been training with us the last couple of days. I liked what I saw in training.

“I knew they would be all right. In the first half they were good and in the second half the energy levels dropped down for the whole team.

“We haven’t trained properly and the kids are young.”

Dunfermline boss Stevie Crawford quickly turned his attention to the Championship opener at home to John Robertson’s Inverness on Saturday.

He said: “I know Robbo from playing alongside him, I know what he is like, he is an infectious character.

“It is a game we will look forward to, we are not getting carried away.

“I said to the boys our recovery starts now, we are in a good place but it will making sure we are fully focused on giving Inverness the respect they are due but trying to get all three points on Saturday.

“Professional is the right word for tonight. I thought we were patient and after getting the first goal we showed we have got goals in the team.”