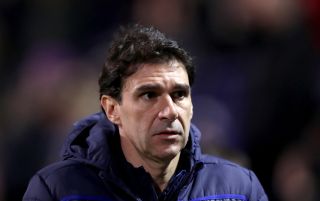 Aitor Karanka admitted his Birmingham team must change their mentality after declaring they went out thinking they were going to lose before their shock 1-0 defeat to Cambridge at St Andrew’s.

Karanka has been appointed to usher in a new dawn at Blues with high hopes of a big improvement on last season’s 20th-placed finish in the SkyBet Championship.

But they slumped to a 16th game without a win, beaten by a side who were 16th in League Two last season and failed to trouble visiting goalkeeper Dimitar Minov, with Robbie Cundy’s first-half goal settling the tie.

Karanka said: “We need to improve and change to a winning mentality and the feeling because I felt the team went out on the pitch already thinking they were losing 1-0.

“The feeling seemed to be ‘It’s another game we’re losing 1-0’. If you feel like that you will lose for sure.”

Given his thoughts on the team’s attitude, it was no surprise Karanka was similarly negative about their performance.

“I am disappointed with the performance because everyone could have been better,” he added.

“I could say they didn’t create a chance, that we’ve only been here for four weeks, that we didn’t have a full squad, but I don’t like excuses.

“We need to do better and improve.”

He said: “We wanted to control them and not let them through us and I thought we did that quite well.

“Our keeper has not had a save to make and, apart from a great shot which hit the crossbar, we haven’t been too troubled.

“I don’t want to get too blase but getting a team with characters like that and buying in to committing to those sort of energy levels isn’t always easy, but we’ve got to become that team and we’ve almost set ourselves a minimum standard of what is acceptable.”

Bonner added: “The boys ran themselves into the ground and their organisation was very good.”

Cambridge scored the only goal of the game in the 18th minute.

Centre-back Cundy planted a towering header into the empty net from Luke Hannant’s free-kick after a blunder by debutant goalkeeper Andres Prieto, who got nowhere near the ball after coming off his line.

Cundy suffered a groin injury and Bonner added: “Cundy is like a tin man in there at the moment, he is going to take some recovering but he is a warrior.

“He is that type – he will just get through it. It was a really good debut and really encouraging for us.”

Blues’ only real chance was when Jeremie Bela’s thumping rising drive from 25 yards crashed down off the bar in the 27th minute.