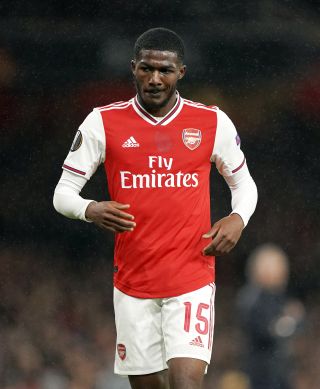 Ainsley Maitland-Niles admits it was almost too good to be true to land his first England call-up just moments after toasting his birthday with a man-of-the-match display in the Community Shield.

The versatile Arsenal man celebrated turning 23 on Saturday with a star turn in the penalty shoot-out win over Liverpool – coolly slotting home his spot-kick to cap a fine Wembley display.

Maitland-Niles then sat in the dressing room and received a text from Three Lions boss Gareth Southgate telling him he had been drafted into the squad to face Iceland and Denmark in the Nations League.

As birthdays go, it was not a bad one for Maitland-Niles, who admits it was hard to believe his day could have got any better.

Asked how good the feeling was to be called up, he replied: “It is a different kind of feeling, especially when Gareth must have text me after the game. I was just staring at my phone like, ‘nah…’

“He just said: ‘I would normally call you, but you are probably getting hassled by the media, so I’ve just text you to let you know, congratulations you’ve been called up’.

“I was just staring at my phone. I didn’t know what to reply back to him.

“I wouldn’t say I was nervous, I just had no words to respond. So I am just sitting there thinking: ‘is this real?’

“It didn’t make sense to me at the time. It was too good to be true almost. It was my birthday, I got man of the match, I scored a penalty – and then an England call-up – all in the same day. It’s crazy.

“I left it like five minutes because I didn’t know what to say. Literally I had no words for him, my fingers just froze. So I put my phone back down, locked it, and thought – ‘surely not!’”

It is a monumental rise for Maitland-Niles, who looked set to be sold this summer after Arsenal head coach Mikel Arteta publicly questioned his mentality earlier in the year.

But he managed to win Arteta round to the extent that he was selected for the FA Cup semi-final win against Manchester City and the subsequent victory over Chelsea in the final, before retaining his place for the Community Shield last weekend.

He is now almost guaranteed to start the new Premier League campaign as a key member of Arteta’s Arsenal squad and Maitland-Niles paid tribute to the change the Spaniard has made to his approach.

“I try to train to be the best every day,” he added when interviewed on England’s official Periscope channel.

“I think being with Mikel as a manager has installed that into me and I want to bring it here and show them I am like that all the time, trying to progress. That’s my mindset.

“It’s special. Not a lot of people can say they’ve played, or even got picked, to train with the England national side.

“I think it is that special moment where you have always dreamed about it as a kid. Under-17s to the Under-21s is fantastic, and don’t get me wrong I am not going to knock that, but this is just above and beyond. It is just a dream come true.”