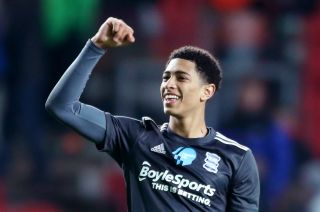 Jude Bellingham could become the youngest ever representative of the England Under-21s over the next few days, but head coach Aidy Boothroyd has no problem with throwing the 17-year-old in at the deep end.

If Bellingham features in the European Championship qualifiers in the Kosovo capital of Pristina on Friday night or against Austria in Ried im Innkreis next Tuesday, he will eclipse Theo Walcott’s record by more than three months.

Bellingham has already made a splash after shining for Birmingham last season, prompting Borussia Dortmund to spend £26million to bring the midfielder to the Bundesliga in July.

Having handed Bellingham his first Under-21s call-up, Boothroyd has had a chance to get up close and personal with the teenager, and the former Watford boss is impressed.

Asked whether Bellingham is one of the best talents at that age he has seen, Boothroyd responded: “Yeah, without a shadow of a doubt.

“There seems to be a debate that it’s too much for him playing at this level, but it’s certainly not. He’ll thrive in this environment and we’ll push him to be even better than what he is.

“I get the vibe that we might be stretching him a little bit too much. I’m all about stretching people – players and staff. If you want to get better then you’ve got to come into environments where you’re going to be stretched.

“We don’t want to put too much pressure on him, but we do want to see him grow and improve as a player, which I’m sure he will with the experiences he’s going to get in Dortmund and also with us.”

Boothroyd revealed Arsenal striker Eddie Nketiah will captain the side in Kosovo in the Young Lions’ first fixture in 10 months, where they will be looking to make it five wins out of five in Group Three.

Norwich defender Ben Godfrey and Everton midfielder Tom Davies will provide support to Nketiah, who has elevated himself in Boothroyd’s thinking by improving his conditioning during the coronavirus-enforced lockdown.

Boothroyd added: “There was an opportunity in the lockdown for professional footballers. There were some who worked at their game and got themselves physically stronger, naturally they would have grown during that period.

“And then there would be players who didn’t use their time as effectively as they could. But Eddie is certainly in the first category, you can tell he’s worked out, he’s physically stronger and faster.

“He’s a quiet leader, he does his talking on the pitch, he has the respect of all the players and staff and, along with Ben Godfrey and Tom Davies, I wanted to get a little leadership group.

Good to be back in @England colours. 🦁🦁🦁 pic.twitter.com/iLdaiiPZPb— Eddie Nketiah 📞 (@EddieNketiah9) September 2, 2020

“The other two boys have been captain before, and we’ll see how things go as we pick each squad for each international window.”

Nketiah, who started in the Community Shield win over Liverpool last weekend and came off the bench in the FA Cup final victory over Chelsea last month, is honoured to take the armband.

He said: “It’s been great. Aidy let me know at the beginning of the camp that I would be captain and it’s a great honour.

“It’s something you dream of as a kid to play for England and to be able to captain this side, I’m really looking forward to it.