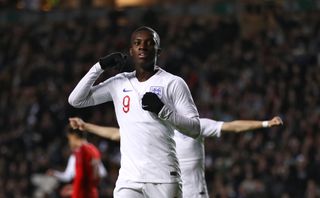 Nketiah moved to within one strike of Alan Shearer’s England Under-21s goalscoring record of 13 by opening the scoring in the Young Lions’ 2-1 win in Austria.

It was the Arsenal striker’s seventh goal in his last three games for Boothroyd’s side, who made it six wins out of six Euro qualifying matches to remain top of Group Three.

When asked if he could soon be losing another player to Gareth Southgate’s senior set-up, Boothroyd said: “That’s the nature of the job.

“If it means another player’s moving up, that’s brilliant. It means they’re doing really well to be anywhere near the manager’s thoughts.

“So if that happens it’s great, we’ll just find the next one. Comparing him (Nketiah) to some of the others who have gone up already, I think he’s at a similar stage.

“He’s competing against some of the best players in the country and if he keeps scoring and he keeps doing it for his club and for us, then he’s going to be asking questions isn’t he?

“Yes, he can do it, but it’s good he gets experiences like this because he didn’t have an easy game tonight.

“He got kicked from pillar to post, which does happen when you’re a centre-forward as good as he is. He has to deal with it and tonight he did that and scored.”

Skipper Ben Godfrey scored his first goal for his country early in the second half before Patrick Schmidt pulled one back for Austria on the hour-mark.

England are six points clear of second-placed Austria in their group with four games to play, but had to fight hard to maintain their 100 per cent record.

“They scored a goal and had hope and we had to dig in right to the end really to get the result,” Boothroyd added.

“It puts us in a very strong position, but we’ve got a few banana skins to get over yet before we can do what we set out to do before the start of the season.”

Boothroyd also praised “unsung hero” Godfrey, adding: “He’s a really good young player. We have high hopes for him as well, so I’m delighted he’s got his goal.

“I don’t know what his career goals-tally is, but the lads were taking the mickey out of him. I think it’s his first one ever, not just for England.”