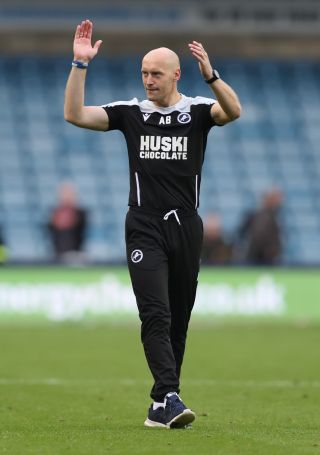 Millwall have reached this stage for just the second time since 2011 with a home tie against either Burnley or Sheffield United to come next week.

“Whoever we play, it’s going to be a tough test. These are two very good sides but it’s a challenge we’re really looking forward to,” said Barrett.

“We’ll prepare well for it, we’ve got a lot of belief in our squad and our players, so it’s a great challenge to be looking forward to.

“Us as staff relish games such as that, and I’m sure it will be no different for the players.

“We’d love to have our supporters in the ground, they’re such a help for us and we really miss the atmosphere they do create.

“It was a very professional performance, there were bits in there where we can be better. We’re delighted with the start, it’s two wins and a draw so confidence is starting to build, we’ve got a little unbeaten run which we can hopefully take into Saturday.

“The application from the boys has been superb. These ties can be really difficult so we’re delighted to come through it.”

Leonard’s terrific 20-yard strike opened the scoring for Millwall, with Mahoney doubling the lead after the break with a goal befitting his fine performance.

Smith sealed the win with a tap-in against his former club but there was still time for a superb strike from the Robins’ half-time substitute Azaz, leaving manager Michael Duff a happy man despite defeat.

“I thought we were excellent, the only difference was in the two boxes. I don’t remember Josh (Griffiths) making a save and they scored with the three chances they had,” said Duff.

“I’ll take that performance. We’ve got to show that belief going forward. We put in a good performance at Peterborough in the first round and now done that against a Championship side.

“We’ve got to be at it all the time. Some of the football that we played was excellent.

“There are real fine margins and that’s what happens when you go up levels. We just couldn’t find the right weight of pass.

“We didn’t stop, even at 3-0 down, I was really pleased with the mentality of the boys.

“I said to the boys that I’d prefer the performance over the result so I’m delighted with every single one of them.

“In sounds a bit silly when you’re beat, but I’m delighted.”