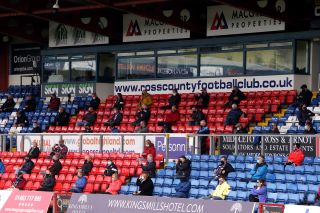 Both Aberdeen and Ross County hosted about 300 of their fans in two test events in the Scottish Premiership.

The Dons responded with a 1-0 win over Kilmarnock at Pittodrie but there was no happy return for the County fans who witnessed a 5-0 home defeat by Celtic.

McInnes said: “From our point of view, we were aware the fans were there from the warm-up.

“The importance of winning today wasn’t lost on us, the fact the fans haven’t been and seen the team in the flesh for so long.

“I think the supporters were really appreciative for the players’ efforts. I think they enjoyed seeing the team. There were some real sparkling moments in that first half.

“They appreciated the work rate of the team. They clapped every blocked tackle, every matched run, every clearance. That same 300 can come back every week.”

County manager Stuart Kettlewell felt like the fans offered a glimpse of normality at the Global Energy Stadium.

“There’s a big difference, albeit there is only 300 people,” he said.

“It starts to resemble more of a football match probably for us all.

“And I think the early indications were that we’ve done it in a really good manner, and the supporters have conducted themselves right.

“The football club has put everything into place and it certainly shows signs for me that we can try and take us forward at the beginning of October, and maybe get a few more people through the door as well.”

The events, which followed a similar test at BT Murrayfield for the recent Edinburgh-Glasgow encounter, were allowed to proceed despite a setback for Scottish sport on Thursday.

Provisional plans for a more widespread return of supporters from September 14 were shelved for at least three weeks following a surge in coronavirus cases in Scotland.

But the boost of having the first fans back in Scottish football grounds since March were even felt by Kilmarnock boss Alex Dyer despite his side’s defeat.

“It’s nice to have a crowd back in the stadium,” he said. “They weren’t cheering for us, but it was still nice. When Aberdeen had a few chances it was nice to hear people clapping.

“Hopefully it gets us back nearer normality and we can look forward to October, I hope.”