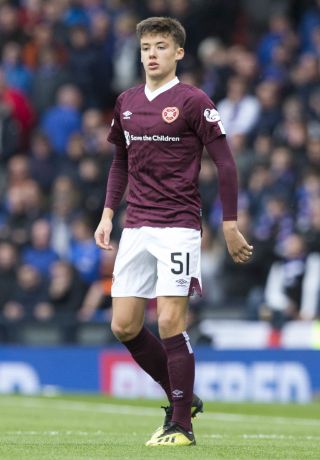 Bologna-bound Aaron Hickey is relishing the “incredible” prospect of facing up to idol Cristiano Ronaldo in Italy.

Hearts have agreed a fee reportedly in the region of £1.5million with the Serie A side for the 18-year-old defender.

Speaking to Radio Clyde at Glasgow airport before he flew out to Italy, Hickey revealed he was looking forward to coming up against the likes of AC Milan’s Zlatan Ibrahimovic and his childhood hero, Juventus forward Ronaldo.

He said: “It’s crazy. The best players in the world are in the league that I’m in.

“If I play against Ronaldo I will be very happy. I love Ronaldo, he’s probably my idol.

“I have looked up to him since I was young and watched him on the telly all the time, but to play against him would be incredible to me.

“My feelings are all over the place, mostly I’m really excited to get over there and see what it’s all about, get to the training ground and get a wee feel of things.

“Nothing is guaranteed yet, I still have to get my medical and get my results.”

Hickey confirmed interest from European champions Bayern Munich but insists the lure of Italy was too strong.

He said: “I went over to Bayern Munich, an unbelievable experience for me to go over and see the best team in the world’s facilities and stuff.

“It was hard to turn them down, but I think Bologna is the right move for me.

“It’s all been crazy, all these teams coming in, but I think Bologna is the right move for me.

“Their supporters have been really good to me on Instagram and things like that and when I was over there I got a family feel to it, hopefully it turns out well.

“I’m still a youngster. I have a lot to learn, but I will go over, try my hardest and see how I do.