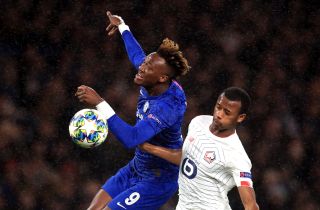 Arsenal have announced the signing of Gabriel Magalhaes from Lille as head coach Mikel Arteta further adds to his defensive options.

The 22-year-old Brazilian joins a lengthy list of central defenders – and other players who can operate in those positions – ahead of the new season.

Here, the PA news agency takes a look at who is available to play at the heart of Arteta’s defence and who may be moved on before the transfer window closes on October 5.

Looked destined for the Emirates Stadium exit door following two seasons out on loan where he was relegated with both Middlesbrough and Fulham. Came back into the fold and looked like making a position in defence his own, only to be hit with a serious knee injury which ended his season in December.

A Brazil youth international and the latest edition to Arteta’s squad, Gabriel impressed for Lille playing alongside former Southampton man Jose Fonte and will be keen to hit the ground running when given his chance to do so.

Was carrying an injury heading into the 2019/20 campaign and could never establish himself as first-choice when fit – did start the FA Cup final but has not been able to recapture the form from before his absence, where he was the key man at the back for the Gunners.2019/20 statistics:
appearances: 13(5)
clean sheets: 6

Although typically more at home at left-back or left wing-back, the Bosnia and Herzegovina international has the size and physicality to play in a central role – concentration and positioning often let him down, however, and he could command a decent fee should Arsenal decide to sell.

No-one splits opinion quite like David Luiz – the experienced Brazilian joined from Chelsea last season and has signed a new one-year deal to remain at the club, was sent off twice and set a new Premier League record by conceding five penalties in a season but Arteta is a fan of his influence on and off the pitch.

Joined on loan from Flamengo in January but was not up to speed and made just three appearances either side of the hiatus for the coronavirus pandemic before suffering an ankle injury – still did enough to convince Arsenal to make his move permanent.

Enjoyed something of a career revival following Arteta’s appointment in December having been almost certain to be heading out of the exit door this summer, that could still be a possibility given his season ended on the treatment table and he has just one year remaining on his current contract.2019/20 statistics:
appearances: 25(2)
clean sheets: 10

Arsenal spent big on the teenager last summer but the £27million man stayed on loan at Saint-Etienne for a season which saw him pick up a couple of injuries and miss periods of a campaign which came to a halt when Ligue 1 was cancelled due to COVID-19 – much is expected of a player who has made so few first-team appearances.

The Greece international was a trusted hand under Unai Emery and started out the same under Arteta but played just three minutes of football after the season restarted and appears surplus to requirements moving forward.

Like Kolasinac, Tierney is more associated with operating down the left but the Scotland international found a regular place in Arteta’s side as the left-sided centre-back in a three-man defence and can easily fulfil the role in the future when called upon.

*statistics across all competitions