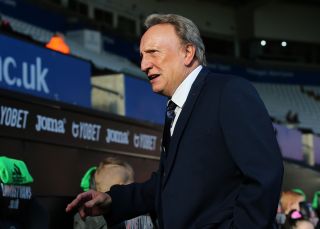 Neil Warnock will take charge of his 1,500th game as a manager on Saturday when Middlesbrough host Barnsley in the Championship.

Here, the PA news agency takes a look at the Yorkshireman’s career statistics.

He has spent more than half of his career in the second tier, 780 games – his tally of 314 wins at that level exceeds his total games for any other division, while he has drawn 222 and lost 244.

Warnock’s reputation is built on eight promotions in his career, including four times taking teams into the top flight – Notts County in 1991, Sheffield United in 2006, QPR in 2011 and Cardiff in 2018 – as well as elevating Scarborough to the Football League in 1987.

By far the largest share of Warnock’s games came with his boyhood club Sheffield United, 388 between 1999 and 2007. He had more than 200 with County and 100-plus with Crystal Palace – in two spells – Cardiff and Huddersfield.

The same clubs largely account for his most successful periods in management, with 163 wins with the Blades and 92 with County, as well as a half-century with both Cardiff and Palace.

The Magpies can narrowly claim to be responsible for Warnock’s highest win rate – 42.2 per cent, to 42.0 with Sheffield United. Plymouth snatch third place ahead of Huddersfield and Cardiff, the only other clubs above 40 per cent with QPR just outside at 39.8.

He spent eight years with the Blades but there are several clubs with whom he has stayed for less than a season – Torquay, Rotherham and second spells at Palace and QPR, while he only took over his current club Boro in June.

Warnock enjoys a 100 per cent record against seven different opponents, though in only two games against Newport and one each against Aldershot, Boston, Cheltenham, Kingstonian, Macclesfield and Slough.

Applying a more realistic minimum threshold of five games, his best record comes against his former club Torquay with five wins from six games, or 83.3 per cent. York (seven out of 10, 70 per cent) and Boro themselves (11 out of 16, 68.8 per cent) follow.

His most frequent opponents are Watford with 38 meetings, one more than Wolves. He has faced Cardiff 35 times and Preston 34, with Reading and Burnley the other teams above 30 on 32 each.

He has most wins against Preston and Wolves, 14 each, with Palace, Burnley, Cardiff and Watford one behind and double figures also against Rotherham, Plymouth, Crewe, Boro, Ipswich, Grimsby and Bristol City.

The Hornets have left him tasting defeat more times than any other team, 18, with September 11’s 1-0 success nudging them one ahead of Reading. Norwich have defeated Warnock’s sides on 14 occasions and Birmingham 13, with Manchester City, Bristol City, Preston, Fulham, Millwall, Cardiff and Wolves also reaching double figures.