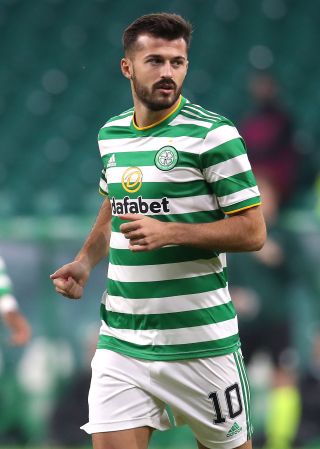 Hibernian lost their unbeaten record and there were first wins for Livingston and Kilmarnock.

Here are five other things we learned from the weekend’s Scottish Premiership action.

Albian Ajeti may not be fit enough to start matches for Celtic but he is making an early impact off the bench. The Switzerland international followed up his Tannadice winner with the second goal in Celtic’s 3-0 victory over Motherwell. His powerful drive will give boss Neil Lennon further food for thought after he started with Ryan Christie up front in the continuing absence of Odsonne Edouard and Leigh Griffiths.

Partnership pays off for Kilmarnock

Get all our sideline shots, reaction from Alex Dyer and a full match replay— Kilmarnock FC (@KilmarnockFC) August 29, 2020

The lone striker is all the rage in modern football but, after failing to win any of the first five Premiership matches, Kilmarnock manager Alex Dyer took affirmative action by pairing Nicke Kabamba and Eamonn Brophy for the visit
of Dundee United. The tactical change paid off handsomely with Kabamba scoring a delightful double, either side of a Brophy strike, in a 4-0 triumph.

Ryan Kent is now the main man at Ibrox

©️ @James_Tavernier with the finish after great play from @ryankent on the right-wing pic.twitter.com/i4QxtzrmsF— Rangers Football Club (@RangersFC) August 30, 2020

Alfredo Morelos has been the leader of the Rangers pack in recent years but with the Colombia international’s mind seemingly elsewhere amid continuing speculation over a move to Lille, manager Steven Gerrard has been looking for another of his stars to take on command. So far it is Ryan Kent putting his hand up. The £7million man struggled to justify that fee last term but was again impressive in a 2-0 win over Hamilton. With Alfredo Morelos staying on the bench, Kent played a part in James Tavernier’s goal and generally gave Accies the run around.

One player can make a major difference

St Mirren were looking to continue their promising start to the season without the suspended Joe Shaughnessy but were beaten far more handsomely by St Johnstone than the 1-0 scoreline suggests. Manager Jim Goodwin started with three at the back in the absence of centre-back Shaughnessy but his team never got to grips with the game despite numerous tactical and personnel changes.

Ross McCrorie is already a star man at Aberdeen

🔴 Our Man of the Match as picked by Steve Cowan in our Matchday Live coverage is Ross McCrorie.— Aberdeen FC (@AberdeenFC) August 30, 2020

The summer signing from Rangers has looked solid in defence for Aberdeen so far but he delivered a superb display in central midfield in a 1-0 win over Hibernian. Derek McInnes hailed the Scotland Under-21 international’s power, intelligence and attitude after he gave the Dons a solid base to work from while Hibernian were missing their midfield enforcer Alex Gogic following a false positive coronavirus test.