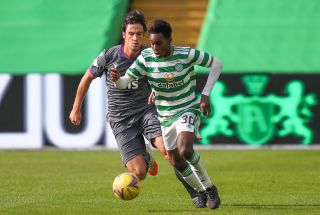 Celtic’s 3-0 win over Hibernian at Parkhead took them to within a point of Rangers at the top of the Premiership after the Light Blues beat Motherwell 5-1 earlier on Sunday.

Elsewhere, there was a 3-0 win for Aberdeen at Ross County, while Livingston and Kilmarnock won on Saturday with Hamilton drawing with Dundee United.

Here, the PA news agency looks at five things we learned from the weekend’s fixtures.

“The team played really well against a hard opponent. We moved the ball well and we took our chances. I thought the win was fully deserved."— Celtic Football Club (@CelticFC) September 27, 2020

Celtic beat Hibernian 3-0 at Parkhead with goals from Callum McGregor, Albian Ajeti and Mohamed Elyounoussi, but it was the tireless Jeremie Frimpong, who returned to the starting line-up, who was named man of the match.

The 19-year-old Dutch wing-back motored up and down the flank all afternoon and gave the visitors no end of problems.

Hibs defender Josh Doig was replaced by the experienced Lewis Stevenson at the interval in the hope of containing the lively Frimpong, but still he kept attacking the Hibs area as Celtic ran out convincing winners.

Motherwell have been showering opponents with spot-kicks this season.

The two they gave away against Rangers brought their total number of penalties conceded this season to eight in just 12 games, with goals from 12 yards accounting for almost half of the 19 they have shipped.

But, having gone exactly 11 months without being awarded a penalty, Rangers got two in 27 first-half minutes at Fir Park to send them on the way to a 5-1 rout.

St Johnstone in need of inspiration

Saints have now scored just once in six games and their problems were encapsulated in a 2-0 defeat by Livingston.

Stevie May passed up chances before Livi scored twice in a minute to leave the Perth side with no chance given their recent scoring record.

In May, Chris Kane and Callum Hendry they have three strikers who have shown they can score in the top flight but not this season with only one goal between them.

Hakeem Odoffin had never scored in 69 games for Barnet, Eastleigh and Livingston before joining Accies on the eve of the campaign.

The defender now has three goals in eight matches after his second diving header of the season earned a 1-1 draw with Dundee United and cemented his position as the club’s top scorer.

St Mirren need some players back

"I understand everybody's frustration but it's very early days just now and we have another opportunity that comes quickly against Aberdeen on Friday night." pic.twitter.com/SLjQDD8UQW— St Mirren FC (@saintmirrenfc) September 26, 2020

The Buddies slumped to the bottom after a 1-0 defeat by Kilmarnock made it five consecutive losses.

Jim Goodwin’s side have not dealt well with defensive disruption in recent weeks following red cards for Joe Shaughnessy and Richard Tait, plus a major Covid-19 setback in the goalkeeping department.

Goodwin will see some light at the end of the tunnel with midfielders Kyle Magennis and Ryan Flynn plus striker Kristian Dennis due back at different stages next month.