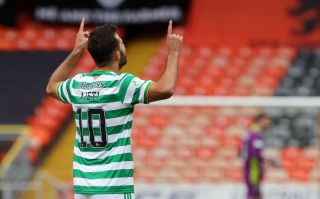 Hibernian beat St Johnstone 1-0 at McDiarmid Park to go level with Rangers at the top of the Scottish Premiership on Sunday.

Here, the PA news agency takes a look at five things we learned from the latest round of top-flight action in Scotland.

Ajeti up and running at Celtic

Albian Ajeti showed Celtic fans why Neil Lennon brought him to Parkhead with the winner against Dundee United.

In the 73rd minute and with an absorbing game at Tannadice goalless, the 23-year-old Switzerland international, signed from West Ham for £4.5million, came off the bench to make his first Premiership appearance for the champions.

With just seven minutes remaining Ajeti pounced on a loose ball and fired in from 12 yards to give the visitors three crucial points.

Rangers no longer reliant on Morelos

🎥 REACTION: Kemar Roofe spoke to @RangersTV after a Man of the Match performance and a debut goal at Ibrox. pic.twitter.com/yhHpnyCOep— Rangers Football Club (@RangersFC) August 22, 2020

There were times after Christmas when Steven Gerrard was forced to persist with playing Alfredo Morelos, even when it was obvious the Colombian was short on confidence and form.

Lille’s recent £16million bid has done little to re-focus the striker’s mind, but, with fresh striking options having arrived in the shape of Kemar Roofe and Cedric Itten, Gerrard now has the luxury of options. He admitted it was an “easy decision” to leave Morelos out for Saturday’s win 2-0 over Kilmarnock following reports he had asked not to play.

Roofe put Gers on way to victory as he opened his Ibrox account before Leeds target Ryan Kent showed how to shrug off transfer speculation as he swept home the second.

Hamilton grab first win of the season in derby

Hamilton picked the perfect place to record their first win of the season as they beat Lanarkshire rivals Motherwell on their own patch.

Accies started the campaign with three straight defeats and were bottom of the table when they arrived at Fir Park.

However, the first points went on the board when defender Hakeem Odoffin, a new recruit from Livingston, bagged his first goal for the club as he powered home an 86th-minute winner.

St Mirren defender Joe Shaughnessy’s dismissal in the 1-1 draw against Ross County left both managers at odds with each other.

County manager Stuart Kettlewell, however, said: “It’s a red card in my opinion.

“I have seen it back and I think my player is very lucky to still be playing at the end. By millimetres he has dodged a real serious injury.”

👊 Stevie Mallan's goal from the spot is enough for all three points in Perth.— Hibernian FC (@HibernianFC) August 23, 2020

With Hibernian struggling against St Johnstone at McDiarmid Park, midfielder Mallan came off the bench in the second half to make his first appearance of the season.

The game looked destined to end goalless until Hibs were awarded a late penalty.

Mallan showed his confidence to blast his spot-kick past Elliott Parish to take Hibs, unbeaten in five games, level on points with leaders Rangers.