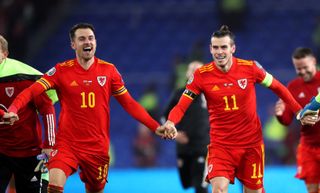 Wales manager Ryan Giggs has named his squad for next month’s Nations League games against Finland and Bulgaria.

Here, the PA news agency looks at the main talking points surrounding a 26-man party that welcomes both new and old faces.

Liverpool full-back Neco Williams has been the talk of Welsh football in recent months following his breakthrough season at Anfield. The 19-year-old has proved such a capable understudy to Trent Alexander-Arnold that there was talk of England making a play for his services due to his grandparental qualification for the Three Lions. But the Wrexham-born teenager is now set to add senior caps to his impressive Wales Under-19 tally and make a push for next summer’s delayed European Championship.

Nearly three years after his last appearance, Hal Robson-Kanu is back in a Wales squad. Robson-Kanu won his 44th cap against the Republic of Ireland in October 2017 as Chris Coleman’s tenure drew to a close. The West Brom striker retired from international football in August 2018 but reversed that decision late last year. Now Giggs has included him in his plans and Robson-Kanu, who wowed Wales fans with his ‘Cruyff turn’ goal against Belgium at Euro 2016, could make a second European Championship.

‘Wales. Golf. Madrid’ said the famous flag about Gareth Bale’s supposed priorities these days. Bale was pictured behind the flag after Wales clinched Euro 2020 qualification last autumn and his relationship with Real Madrid has pretty much gone downhill ever since. The four-time Champions League winner played just 48 minutes of Real’s 12 post-lockdown games and raised some eyebrows with his comical antics on the bench. But Bale’s love of playing for Wales has not diminished and he will be there to lead his country into Nations League battle.

Chris Gunter’s hopes of becoming the first Wales men’s player to 100 caps are still alive. Gunter was released by Reading earlier this month after eight years at the Madejski Stadium and is still without a club. The 31-year-old must have feared the worst as Ashley Williams was left out of the Wales squad 12 months ago when he was between clubs. But Gunter remains in the set-up for now alongside Williams, who is again unattached, and will hope to reach the hundred mark in the next few months.

Neil Taylor and Sam Vokes, two heroes of Wales’ march to the Euro 2016 semi-finals, were both left out when Giggs selected his first squad since last November. Taylor is the victim of Neco Williams’ rapid progression and the teenager’s ability to play right-back or left-back. Vokes, who scored in the Euro 2016 quarter-final over Belgium, misses out with David Brooks fit again and Robson-Kanu back in harness. Both are the wrong side of 30 but should not be written off just yet.