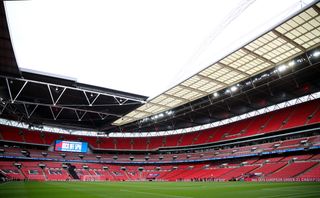 The English season’s traditional curtain-raiser takes place this weekend when Wembley plays host to both the men’s and women’s Community Shield.

Ahead of Saturday’s matches, the PA news agency picks out some of the main talking points.

Saturday will see the first ever Community Shield double header at Wembley, where the day will kick-off with Barclays FA Women’s Super League champions Chelsea’s clash against current Women’s FA Cup holders Manchester City. That 12.30pm encounter will be followed at 4.30pm by recently-crowned FA Cup winners Arsenal taking on Premier League champions Liverpool. Unfortunately, as with all recent major football events, the matches will be played out in front of empty stands due to Covid-19.

Boost for the women’s game?

Chelsea’s clash with City will be the first women’s Community Shield in 12 years. Football Association chief executive Mark Bullingham said that “it’s a sign of our commitment to the women’s game and its growth, to have a curtain raiser that mirrors that of the men” and new City boss Gareth Taylor believes it can provide a shot in the arm. Chelsea counterpart Emma Hayes is equally pleased to see the event return for the first time since 2008 and hopes the fact it is being shown on terrestrial television provides an extra boost.

Too early for the men’s match?

The positive energy about the women’s match contrasts with those involved in the men’s fixture. Many fans will be surprised to see the 2020-21 curtain-raiser taking place in late August, given last season’s Champions League has only just finished and the Premier League ended a month ago. There is no little frustration for Arsenal boss Mikel Arteta, who cannot understand the decision to squeeze the match in now. “We’ve had two training sessions so you can imagine that this game comes straight in the middle of our mini pre-season, but as well we haven’t had much time to lose a lot of the condition,” he said. “Obviously it’s not an ideal moment to play in this final but the players are motivated.”

Given the lack of break, it would be a surprise to see the Liverpool line-up resembling last season’s first-choice XI or Arsenal deploying the team that won the FA Cup against Chelsea at Wembley on August 1. William Saliba would be an exciting selection in the Gunners’ new-look backline after impressing on loan at St Etienne last term. Liverpool striker Rhian Brewster also impressed in a temporary stint away from the club and scored twice off the bench against Red Bull Salzburg in Tuesday’s 2-2 friendly draw.

Arsenal boss Arteta’s positive test for Covid-19 was the catalyst to football being shut down in mid-March. Five-and-a-half months on, the wide-reaching impact of coronavirus continues to be felt across society and the break in play has reportedly led to an increase in players being infected. Manchester United midfielder Paul Pogba is confirmed to have tested positive for Covid-19 and Arteta expects such issues to continue. “We are trying to get used to it, get around it, and trying to manage the situation as well as we can,” he said. “There is not much we can do and we know that there are some uncertainties we cannot control at the moment.”