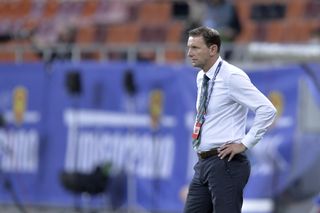 Ian Baraclough will take charge of his first Northern Ireland game at Windsor Park on Monday night when his side host Norway in the Nations League.

After the late drama of Friday’s 1-1 draw with Romania in Bucharest, Northern Ireland will look to build on their first ever point in the competition.

Here, the PA news agency looks at five talking points ahead of the game.

Davis to move level with Jennings

Captain Steven Davis should be nailed on to start the game, and when he does he will move level with goalkeeping great Pat Jennings as Northern Ireland’s most capped player. Though now 35, Davis shows few signs of slowing down and remains part of the side’s spine as he has been now for 15 years. “He’s a role model,” said his midfield partner George Saville. “I think I can speak for everyone inside the camp, you can’t speak highly enough of Davo, he’s a tremendous pro and deserves all the plaudits he gets.”

Though he has been looking forward to this international window since taking the reins in April, it is safe to say this is not how Ian Baraclough wanted his Windsor Park bow to come. The National Stadium will be empty for Norway’s visit under coronavirus protocols, and Northern Ireland are not looking forward to playing without their fans. “It’s not the same,” Friday’s goalscorer Gavin Whyte said. “You need the fans in, especially our fans because you know how good they are and they always give us a boost, but it is something we’ll have to deal with at the moment.”

Jonny Evans missed Friday’s trip to Bucharest for personal reasons, but is back in contention to start on Monday. Though Arsenal youngster Daniel Ballard put in a solid debut performance in his place against Romania, Evans will be welcomed back. The Leicester man’s experience and quality could be invaluable against a Norway side boasting a feared frontline in the shape of Joshua King and young sensation Erling Haaland.

Baraclough will need to rethink his own attack, with Josh Magennis suspended after collecting two yellow cards inside the opening 39 minutes on Friday. Whyte certainly raised his hand for a starting berth with his 86th-minute equaliser, though fellow substitute Kyle Lafferty got the assist. Magennis began alongside Saville, playing slightly behind Conor Washington in the starting formation in Bucharest, so if Baraclough keeps the same shape, Whyte would seem the more obvious candidate.

Whyte may have got the goal but keeper Peacock-Farrell was the star of the show in Bucharest, with Baraclough crediting the Burnley man with “three or four world-class saves” as he kept Northern Ireland in the game during a tough second half. The 23-year-old had not played a club game since March last year and was making his first competitive appearance of any kind since Northern Ireland’s last outing in November, but showed he is anything but rusty. Given the firepower Norway boast he could be needed to shine again.