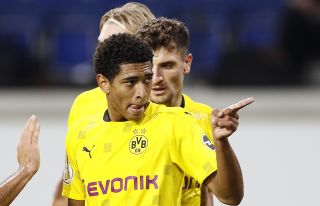 Jadon Sancho and Jude Bellingham were both on the scoresheet for Borussia Dortmund in their DFB-Pokal Cup win on Monday evening.

Here, the PA news agency takes a look at the best of the young English talent playing in Europe.

If Manchester United get their way, Jadon Sancho will be playing in England soon, but he looks set to stay at Borussia Dortmund for another season. The teenager has become one of the biggest stars in Europe with his dazzling displays in the Bundesliga, regularly contributing goals and assists. If he stays at the club he will be hoping to help end Bayern Munich’s domination in Germany.

The 17-year-old will be aiming to follow in the footsteps of Sancho after he joined him at Signal Iduna Park this summer from Birmingham. Bellingham is a star in the making, having also been linked to Manchester United, and it will be fascinating to see how he copes at one of the top clubs in Europe while still so young. He made a good start, scoring on his debut in the DFB-Pokal Cup on Monday evening.

Edwards was tipped to be the next big thing at Tottenham, though was perhaps not helped by Mauricio Pochettino comparing him to a young Lionel Messi. It did not work out for the striker at Spurs and after a brief spell in Holland, Edwards is now plying his trade in Portugal at Vitoria Guimaraes. He scored nine goals in 31 appearances last season, including one against Arsenal in the Europa League, and still only 21 has the potential to make it big.

Another player trying to make his way in the Portuguese league is Angel Gomes, who is on loan at Boavista. The attacking midfielder was released by Manchester United in the summer and quickly snapped up by Lille, who then loaned him straight out. Still only 20, Gomes should be able to thrive in a relatively weak league.

Mavididi is one to watch in Ligue 1 following his £5.5million move to Montpellier. Big things have been expected of the 22-year-old, who began his career at Arsenal and was transferred to Juventus in 2018. He did not make it in Turin, though, and after spending last season on loan at Dijon he has moved to France on a permanent basis.