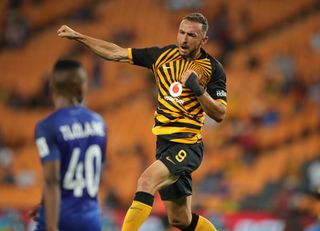 Pitso Mosimane’s Al Ahly are reportedly set to complete the signing of Kaizer Chiefs striker Samir Nurkovic for a supposed fee of over R21 million.

Former Mamelodi Sundowns coach Mosimane has been in charge of the Egyptian giants for under a week, but he has reportedly already made his first move in the transfer market.

Nurkovic moved to Chiefs ahead of the 2019/20 campaign and hit the ground running scoring 14 goals and providing 6 assists in 31 games across all competition for the Glamour Boys.

🇷🇸 | Samir Nurkovic (28) to 🇪🇬 @AlAhlyEnglish is done 🤝🏼He will become 🇿🇦 @TheRealPitso first signing since taking over the African #ClubOfTheCenturyNurkovic will cost #AlAhly over $1.3 million13 goals in 25 appearances for 🇿🇦 @KaizerChiefs last seasonBrilliant coup 👌 pic.twitter.com/NkLmFQRKHIOctober 6, 2020

The Soweto giants, though, were handed a two-window transfer ban by Fifa in February for illegally signing Adriamirado 'Dax' Andrianarimanana from Fosa Juniors, who claimed the midfielder was contracted to them when Chiefs signed him in 2018 and as things stand they would not be able to bring in a replacement for the Serbian.

The reported fee of over R21m will, however, likely convince Amakhosi, who are now managed by Gavin Hunt, to let Nurkovic leave for Egypt.

Reports in Egypt suggest the deal is done, however, contrary reports from South Africa emerged later suggesting that the Egyptians are yet to table a bid and that Saudi Arabian side Abha FC have tabled an offer in the region of  R7 million.

🇸🇦 @abhaFC have made the first official move for Samir Nurkovic.The Saudi Pro League side have tabled a $400k bid for his services.New @KaizerChiefs contract offered to match highest-earners.No bid from Al Ahly as things stand. 👉 https://t.co/MxneVzPxqA pic.twitter.com/SIk8HSMoZ4October 6, 2020

What is clear is that Nurkovic is a wanted man and Chiefs face a battle to hold onto him.