While the North Africans were hoping for an upset, they describe the result against the 2018 finalists as satisfactory.

Morocco and Croatia drew 0-0 at Al Bayt Stadium in what was a rather uneventful game, aside from the boisterous enthusiasm of supporters of the Atlas Lions, as the Moroccan side is known.

While many Moroccan fans were hoping for an upset against the finalists of the 2018 World Cup, a draw sets their team up for a possible pathway to advance beyond the group stage of the World Cup — and its supporters know it.

“We were up against a much stronger opponent; … I thought maybe we could repeat what Saudi did, but still it’s okay,” Moroccan fan Belal Hamdou, who lives in Doha, told Al Jazeera, referring to Saudi Arabia’s dramatic 2-1 coup against Argentina on Tuesday. “A draw will do for now. … The team could have attacked more, but I don’t want people to put pressure. Let’s support them till the end.”

The Moroccans went into the game very much the underdogs, but highly rated Croatia and their star player Luka Modric were unable to get past their defence to score. 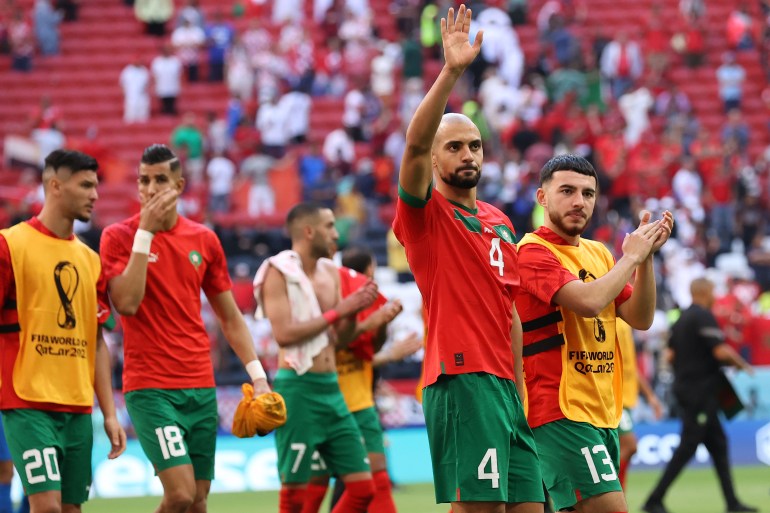 Morocco held Croatia to a scoreless draw in Group F of the FIFA World Cup on November 23, 2022, in Qatar [Showkat Shafi/ Al Jazeera]

By the end, it was clear that the Moroccan fans’ belief in their team had lifted to a level where they felt a surprise win was possible.

The fans were largely subdued after the final whistle, except for the jeers when Modric was announced player of the match.

“I wanted a win badly,” said Mohammed El Yamiq, 42, from the western Moroccan city of Mohammedia. “… It was very much a boring game, … but this will do for now. It is a good booster for us when we play others in the group.”

The stadium in Al Khor, Qatar, was filled with colour and excitement. It was a sea of red and green, the shades of the Moroccan flag. 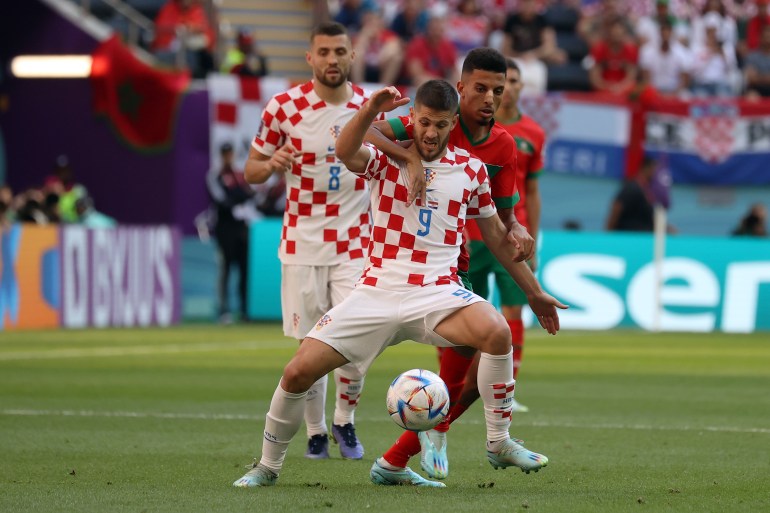 Croatian forward Andrej Kramaric battles for the ball against a Moroccan defence that kept the 2018 finalists from scoring in their opening match at the World Cup in Qatar on November 23, 2022 [Showkat Shafi/ Al Jazeera]

The Croatian fans were certainly in far fewer numbers than their Moroccan counterparts.

Frank Kanajet, who is from the southwestern city of Split, felt his Croatian team had the better chances. “As finalists of the 2018 World Cup, there was an obligation for us to win, ” the 60-year-old said.

But his son Andre was less surprised and said the result was “expected”.

“Morocco is a strong team,” said the 38-year-old, who lives in Abu Dhabi. “… It was more or less evenly matched.”

Another Croatian fan named Josep said he would have “felt more easy” with a win because he believes Belgium and Canada, the other two teams in Group C, will prove tougher opponents than Morocco.

Croatia plays next on Sunday against Canada, and Morocco take on Belgium on the same day.