Doha, Qatar – After Takuma Asano scored Japan’s second goal against Germany in their World Cup opener, there was a brief moment of silence inside Khalifa International Stadium.

The stunned German fans could not believe what had just happened. The patient Japanese were waiting to see if an offside would be called.

Then, after the goal stood, it was bedlam.

“I was jumping. I was screaming. I fell and hurt myself, but I don’t care,” Kayde, a 13-year-old Japanese fan, told Al Jazeera outside the stadium after the match ended. 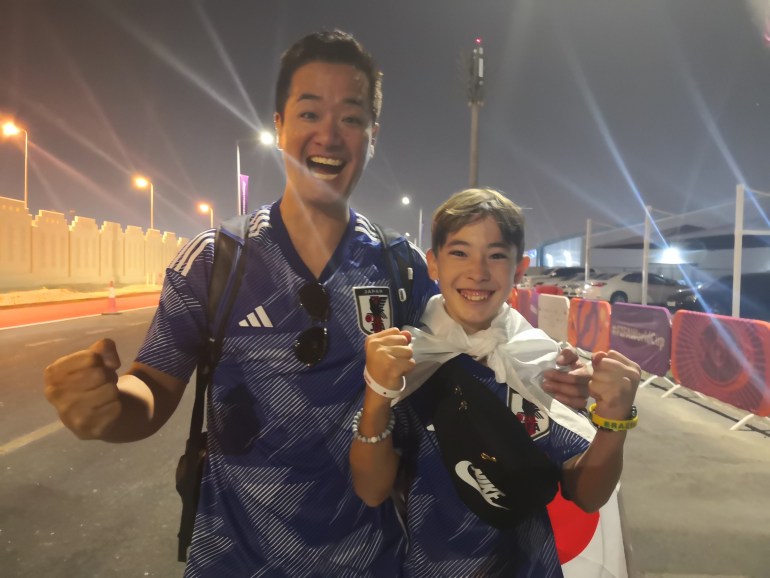 Japan came from a goal down to beat Germany 2-1 in the first game of Group E in Doha on Wednesday, following in the footsteps of Saudi Arabia’s shock win over Argentina with the same scoreline on Tuesday.

Germany had taken the lead in the 33rd minute when İlkay Gündoğan netted a penalty to cap a dominant performance. But they then failed to convert several chances and were made to pay by two second-half goals in the space of eight minutes from Ritsu Doan (75′) and Asano (83′).

Kayde and his father Takashi flew into Qatar from the United States to support the national team of their country of birth.

“It was unbelievable. When Japan scored the first goal, we were anxious because the Germans always come back stronger – but they didn’t,” said Takashi.

His anxiety didn’t end there. “When added time was shown on the screen, I set a timer on my phone and kept staring at it until the referee blew his whistle.”

Another Japan fan, Knichi, who has travelled to Qatar on his own, said he needed a moment to take in what had just occurred.

“Maybe I will go to the FIFA Fan Festival and find some Japanese fans to celebrate with, but I need a breather. My heart is going up and down,” he said, his hands moving in a wave.

Japan made its World Cup debut in 1998 but was unable to go past the first round. It crossed that hurdle when it co-hosted the tournament with South Korea in 2002, and then again in 2010 and 2018.

The overriding feeling among the fans of the Blue Samurai was that of disbelief, and Knichi said the win against the 2014 world champions will go down as Japan’s best in the tournament’s history.

“If you asked me for a prediction before the match, I would have said Japan will lose. At best, a draw. A win? Not happening.”

Kosuke, another Japanese, said his compatriots back home would be up all night.

“They will be watching, partying and then waiting for tomorrow to be announced as a day off, just like Saudi Arabia,” he said in a nod to the Saudi government’s decision to declare Wednesday a public holiday after their upset win over Argentina.

The Japanese fans who travelled to Qatar from their home country and other parts of the world got their money’s worth on Wednesday, and now cannot wait for Japan’s next game against Costa Rica on Sunday.

The defeat to Japan brought painful flashbacks of their last World Cup campaign four years ago in Russia, when they did not make it past the first round.

“Everything that could go wrong, went wrong for us,” Thomas, a German fan, told Al Jazeera, as more of his fellow fans trudged off in silence with drooped shoulders and flags folded away. 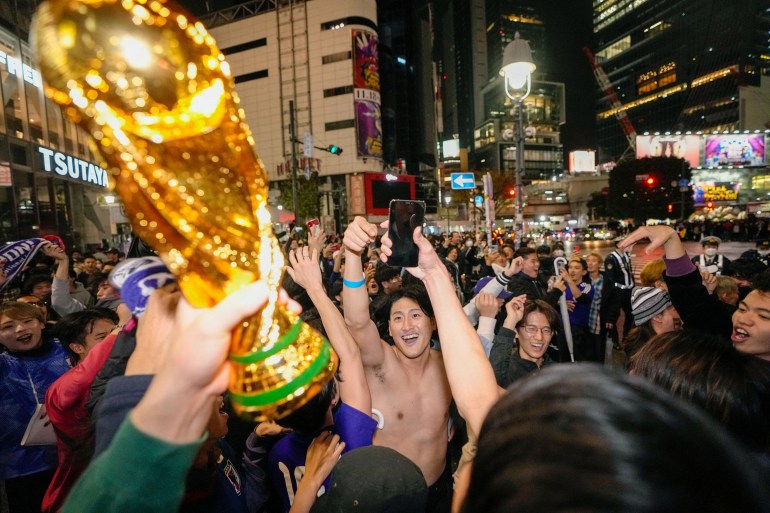