Doha, Qatar – When Qatar was announced as the host of the 2022 World Cup 12 years ago, Aisha al-Ali and her husband had recently married and were starting to build their new house in Rawdat al-Hamama, a village neighbouring Lusail, Qatar’s second-largest city.

Her husband had some doubts, saying the location was too remote, but she assured him that with the approaching tournament, “I’m sure Qatar will change.”

She was right. In a little more than a decade, roads, highways and bridges were constructed, easily connecting the entire country.

Since being awarded hosting rights in 2010, Qatar has spent more than $200bn on developing and improving infrastructure, including building seven new football stadiums.

“We only had 12 years to build the infrastructure, build these highways, make sure [Qatar] has public transportation and roads for easy access for all the stadiums,” says al-Ali, a mother of three in her 40s.

“Getting from my new house to my in-laws or parents, back then it would take me half an hour, now it takes me 15 minutes,” she says, referring to the highways and roads built over time.

“We are so proud of hosting the World Cup and the achievements that Qatar made,” says al-Ali, adding that the event itself is a “moment” she has been waiting for since 2010.

As it’s the first time for an Arab, Muslim country in the Middle East to host “a grand event such as the World Cup … it is our time to shine,” al-Ali said.

“It is our time to show the world that we are a part of you, we are as good as you to host it. Sports unites all nations together.

‘An event for the world to enjoy’

Sheikh Suhaim al-Thani, 31, a manager at Qatar Free Zones Authority, which helps foreign businesses wanting to work in the country, told Al Jazeera the sporting event is not just a Qatari accomplishment but one “for all Arabs, Muslims, and anyone who genuinely enjoys football”.

“Qatar is the smallest country to ever be able to accommodate the needs of such a tournament,” a visibly proud al-Thani said.

The entire country comprises just 11,586 square kilometres (4,473 square miles), making it smaller than the Australian city of Sydney. It is just a 200km (124 mile) drive to reach the northernmost point in Qatar from the very south of the peninsula.

Al-Thani will be watching eight matches in the stadiums but has planned fun evenings with his friends for other games at his majlis, a traditional room in Qatari homes where friends, family and community members gather to socialise. 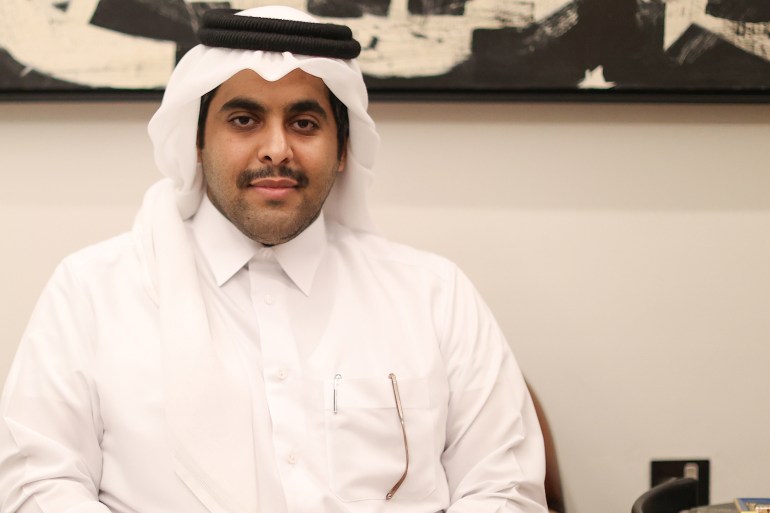 ‘Qatar is the smallest country to ever be able to accommodate the needs of such a tournament,’ said Sheikh Suhaim al-Thani [Showkat Shafi/Al Jazeera]

The aroma of Arabic incense popularly known as bakhoor fills the air at his majlis, an extended part of his home on the outskirts of the Qatari capital, Doha.

Al-Thani believes that the event can show Western sceptics how an Arab, Muslim and Middle Eastern country can successfully pull off such a big event.

He said he feels the overarching narrative in the Western media about Qatar hosting the Cup has been negative and lopsided.

“These [media] accounts do not describe how much Qatar has transformed over the years,” he said.

“Qatar has transformed beyond recognition in the past few years, we are greener, there’s so much innovation, digital transformation. All of it has come together just in time for the World Cup. This is celebration time,” he said.

For Maha Kafoud, 21, a student who has been studying psychology in Melbourne, Australia, it is not just the country’s infrastructure that she has seen change noticeably over the years.

Since she last returned to Qatar for a visit in January 2020, she has started noticing shifts within Qatari society.

“Before, if a Qatari woman wasn’t wearing an abaya, everyone would freak out, look at her and judge her. But since I’ve been back, I’ve been wearing hoodies and going around Doha to all the new venues and stuff, and really no one cares,” Kafoud said.

“I’ve been seeing [Qatari] men and women together and no one bats an eye when they see that, either,” she said, adding that with so many people from around the world arriving in Qatar, the change is “an expected thing”.

Since returning earlier this month to watch the World Cup, Kafoud said the country feels “even more progressive and welcoming … all of this while still holding onto our culture and traditions”.

Kafoud attended Sunday’s opening ceremony with her father, an avid football fan who played the sport for 20 years when he started his own local team in Qatar called Al-Matar Al-Qadeem.

“That was a historic event that I’ll remember for the rest of my life,” Kafoud said.

“We truly showed our culture to the entire world … Knowing that millions of people saw the way we dance, heard our songs, heard the Quran being played; it was just such a beautiful thing.” 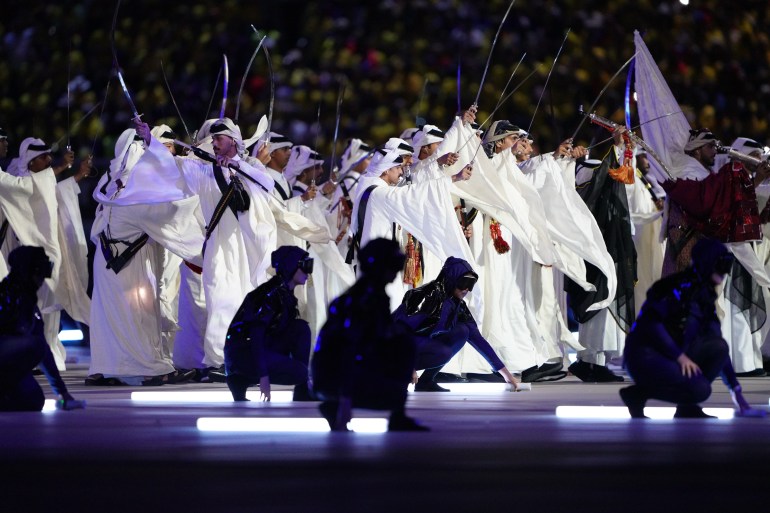 Presenting alongside Freeman was Ghanim al-Muftah, a 20-year-old Qatari man who was born with a rare condition that impairs the development of the lower spine. He recited a verse from the holy Quran calling for global unity.

“O humanity! Indeed, we created you from a male and a female, and made you into peoples and tribes so that you may get to know one another,” he recited.

Qatar welcomed football fans from around the world with a beautiful verse from the holy Quran to call for global unity.

Oscar winner @morgan_freeman narrated the opening segment of the 2022 World Cup, titled ‘The Calling’, telling viewers: ‘We all gather here in one big tribe.’ pic.twitter.com/j3dbxM3Yii

For the opening match where Qatar played Ecuador, around 60,000 fans were packed into the Al Bayt Stadium in the city of Al-Khor, whose exterior was designed to resemble a traditional Bedouin tent.

Fireworks, singing and dancing marked the opening ceremony, with performances mixing themes of Qatari tradition with other cultures.

“It was such a moment of pride for me and I think to all Qataris as well, even foreigners … we were all left in tears,” Kafoud said.

“I don’t think that’s ever been done before, where we [Qataris] were able to show a part of our Arab and Muslim heritage to the entire world.” 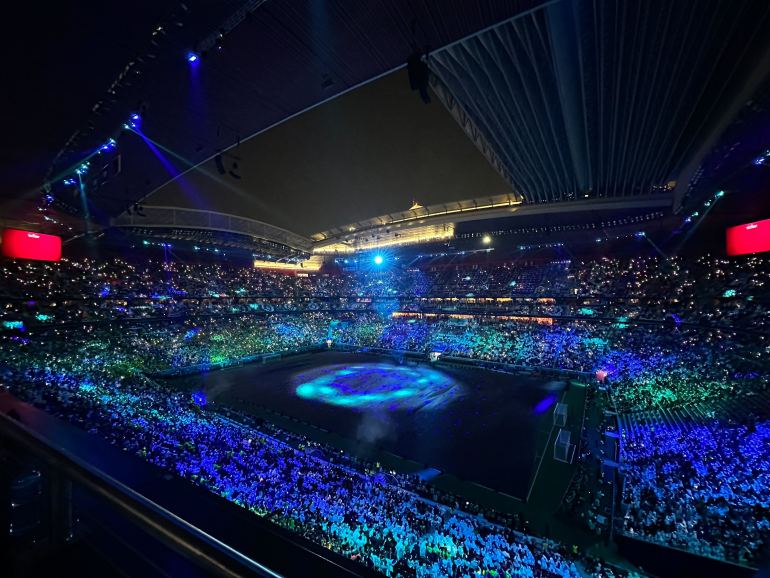 About 60,000 fans packed into Al Bayt Stadium, whose exterior was designed to resemble a traditional Bedouin tent [Katya Bohdan/Al Jazeera]

Even after the World Cup is over, Kafoud said she is “looking forward to seeing the change” that she hopes will follow.

The al-Ali family and their three children are excited to see the football games in person, and have bought tickets to six different games at various stadiums to get “the full experience”.

Their house, which they once worried was too isolated, is now near one of the stadiums hosting the tournament in Lusail including matches with Portugal and Argentina, teams the family will be cheering for from the stands.

“We are a fan of [Argentina’s Lionel] Messi and [Portugal’s Cristiano] Ronaldo and I understand it’s their last World Cup … so it’s nice to come and see,” al-Ali said.