Fans say that with the economic and security issues they face at home, football is a ‘stress reliever’.

Doha, Qatar – Mexico’s team aren’t the favourites in this year’s World Cup, but that does not seem to matter to their fans.

“We dream with football, we eat with football,” said Omar Soriano, 32, who hails from Toluco, Mexico. “Here we are all united to back the national team … that’s what our players need … to know we have their backs.”

Out with their sombreros, palm straw hats, Lucha Libre masks and Mariachi shoes, thousands of El Tri die-hard fans are leaving their mark not just here at Lusail stadium, but across Doha.

Some had their faces painted with the “La Catrina”, a skeletal image representing what has become a symbol of one of Mexico’s most renowned festivals known as the Day of the Dead parade.

“Football is a stress reliever for Mexicans back home … rich, poor, man or woman, football brings us together,” Soriano told Al Jazeera.

In the famous Souq Waqif market, it has become routine to see hundreds of Mexico fans singing and dancing, as onlookers cheer them on and join in on the fun, a similar sight being witnessed at the stadium today.

Soriano explained that Mexicans are eager for the “rest of the world” to experience and communicate their very culture.

“We are very diverse nation with many ethnicities … we are very proud of our culture,” he said. “Back home you won’t see us wearing all this local attire. But here, we would like to promote who Mexicans are. We want to be ambassadors.” 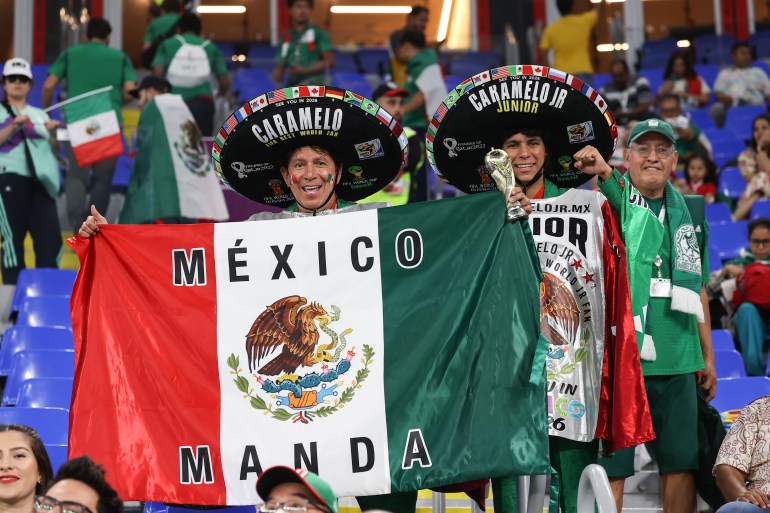 Abel Costa, 61, told Al Jazeera that progressing out of the group stages would be a “huge win” for Mexico and provide a boost to a country facing difficult economic and security issues.

“People back home have so little … There is lots of poverty and violence. People are just trying to make it one day at a time,” said Costa, who travelled to Doha with several male members of his family.

“Football takes their minds off all the problems they have,” he said, adding that if Mexico wins a game in the tournament, “it will be a huge party in the street.”

On Saturday evening, Mexico faced Argentina, a team it has never beaten in a World Cup tournament. But to the fans, this fact hardly matters.

“The pressure is all on Argentina. They need this one more than us … yes, we need to absolutely win but they are more nervous,” Costa said.