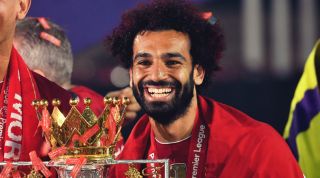 Since arriving at Anfield in 2018, Mohamed Salah has played like a man possessed. 73 goals in 108 league performances tell their own story: he's one of the most prolific goalscorers in world football, right now.

However in recent days, noise has started to grow about his place at Liverpool. The Reds have only just won the title, but it sounds as if Mo is looking to go.

Pre-lockdown, Jurgen Klopp confirmed he didn't know whether the forward would stay beyond this season.

“I have no idea, actually, but you could ask me the same question for all the others and I have no idea. I didn't think about it until [the press] asked me,” he told a press conference, not exactly easing the worries of Liverpool fans.

What's going on? Are Liverpool about to lose their Egyptian king?

Why would Mohamed Salah be leaving Liverpool?

Salah is 28 now. This is a key moment in his career.

As Mo himself admitted, he's won the league and the Champions League with Liverpool. That's on top of the other two trophies he's lifted in the last 12 months - and without mentioning the sheer domination with which Jurgen Klopp's side have battered teams this season. What more is there to do at Liverpool?

For some, simply playing for Liverpool as long as you have legs is enough. You get the feeling that like Trent Alexander-Arnold, as just one example, will never want to leave Anfield. But others may wish to try new challenges. Salah is a particularly driven individual: you only need to see his body language on the pitch to understand that. He may want to test himself in other waters.

WHERE DO LIVERPOOL GO NEXT? What Jurgen Klopp will be looking for in the transfer market this summer

Then there's the case of why Jurgen Klopp may be willing to let him go. Klopp is a coach who hates to stand still, always adding either a new face or facet of play to his teams, so that they won't get stale. Look at the way he moved Sadio Mane from the right to the left under Liverpool, despite how well he was playing there; or how he added Naby Keita to a squad packed with top midfielders with the idea of him displacing one. Even last summer, the expectation was for Alex Oxlade-Chamberlain, back from long-term absence, to establish himself in the side, and though that didn't really happen, the Reds have improved the efficiency of their press and brought more long balls into their play in order to keep one step ahead of everyone.

Really, Salah is the most expendable of the front three in the short term. Sadio Mane is a phenomenon who creates and scores, whatever patch of the pitch he's placed on; Roberto Firmino plays a very specific role that Takumi Minamino might be able to fill in at soon, but given his importance to the side - and the specificity of what he does for Liverpool - it's hard to see him going.

There are plenty of Salahs in world football - many of them have based their game on his. Replacing him might be the easiest way to refresh the attack

And if it's true that Liverpool couldn't justify the £50m release clause of Timo Werner, selling Salah for double that fee could be a good way to secure funds to improve in a number of departments.

There's not a club on Earth that wouldn't want Salah. Not only has he shown that he's ruthlessly efficient in front of goal, able to score on huge occasions and can function as a No.9 when needed, but his brand is huge.

Salah has reached iconic status in the last few years. He's massive not just in his home country, but has appeared on the cover of GQ Middle East and Time. His influence seems to transcend culture and he'd be a coup for any club with a savvy marketing team.

Naturally, Real Madrid and Barcelona are the two destinations most suitable. The Liverpool star would be a completely different kind of Galactico for Real, but with Eden Hazard on the left-hand side playing the Mane role and Karim Benzema having spent a career vacating the penalty box for a prolific wide-goalscorer, Salah would immediately fit in with the side. He's young enough to give four or five good seasons to Los Blancos and given how they've struggled for goals this term - not to mention how much Zinedine Zidane doesn't like their current right-wing Galactico, Gareth Bale - signing Salah wouldn't be purely a vanity move. How he'd get on with Sergio Ramos is anyone's guess, though.

Salah here, leaving a defender on the deck before curling it top bins. Lovely stuff pic.twitter.com/IkJSGc0p3UFebruary 27, 2019

Equally, Barça need a forward who can stretch play. Current triumvirate Messi, Suarez and Griezmann all want the ball to feet: Salah runs into space. Given how Liverpool have been linked with Ousmane Dembele for quite some time, it's not out of the realms of possibility that the two clubs could perhaps work a swap deal - even including former Red Philippe Coutinho - which would also free up the no.11 shirt for Salah at Camp Nou. The only issue would be Messi's approval: the captain perhaps wouldn't want to share that right channel, and would much rather Barcelona signed his countryman Lautaro Martinez.

Any other side moving for Salah would be a huge shock. Juventus likely don't have the cash. Bayern Munich have already moved for Leroy Sané. Paris Saint-Germain are bound by FFP laws and already have Kylian Mbappe to play on the right. Manchester United could do with a right-winger but Liverpool aren't exactly going to sell to a rival that fierce; same for Manchester City, who would probably use Salah up front, as a long-term Sergio Aguero replacement. Atletico Madrid made almost £300m in player sales last summer and could feasibly offer Thomas Partey, Thomas Lemar, Saul or a combination of the three in the deal - though Salah doesn't exactly fit Diego Simeone's football and likely wouldn't see the Wanda Metropolitano as a step up. Maybe if the Newcastle United takeover goes ahead...

Maybe the MLS would move for a star of that stature, but it's unlikely. The only other guess would be the Middle East, should a club or league decide that now's the time to transform the area into a league for superstars. Seems a bit far-fetched though, doesn't it?

Is there any truth in the rumours?

Let's not forget, Salah has just made one comment. It's not as if he's been pining for the door for months, has he?

Going back to his age, Salah is 28, in peak condition, and has just secured his club the biggest prize in English football. It's not beyond the realms of reasoning that any flirting with European giants could be to engineer a pay rise at Anfield.

Given the state of the economy right now, it's difficult to say whether any club would be willing to stump up the money that Liverpool would demand for their top scorer over the last three years - if Coutinho went for around £150m, how much is a much better player worth? - but one of the defining changes in Liverpool in the last two years has been how they're not a selling club anymore. Jurgen Klopp won't want to sell a player because he has to, he'll want to do it because he wants to.

There's bound to be more talk of Liverpool players heading for the exit over the coming weeks, with Gigi Wijnaldum already in the gossip columns, linked with moves away. The Salah rumours aren't exactly concrete, right now. It's best that Liverpool fans perhaps take them with a pinch of salt for now.

TRANSFERS The position EVERY club needs to strengthen in this summer