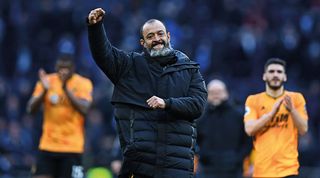 Fosun International have flipped expectation levels on their head since buying Wolves in 2016. From the moment they handed Steve Morgan £45 million for the club, ambition has been the watchword at Molineux.

The West Midlanders have had a truly exceptional rise since hiring Nuno Espirito Santo as their head coach in May 2017. The former Porto goalkeeper won the Championship in his first season, then led Wolves to successive seventh-placed finishes in the Premier League.

It’s the first time they have hit those heights in consecutive top-flight campaigns since 1960-61. Quietly, Wanderers’ target was to break into the top six, but only their fiercest critics would bemoan a seventh-place finish after Wolves played 59 games over 383 days, reaching the Europa League last eight after the domestic season ended in July.

Statistically speaking, Nuno’s team improved on their 2018-19 campaign, even if they couldn’t better their position. They picked up more points (59 vs 57), scored more goals (51 vs 47) and conceded fewer times (40 vs 46), while chief marksman Raul Jimenez finished with 17 goals in the Premier League – four more than he had managed in the previous season.

These marginal gains meant a lot to Nuno, as much as he declares that he doesn’t look at the league table. Preparation and performance are everything to the Portuguese tactician, who in February called Wolves his “obsession”, adding, presumably out of his wife’s earshot: “I don’t think about anything else.”

Fosun and Nuno see Champions League football as the next step, and their optimism has some validity: one of the latter’s main strengths is improving players already at his disposal. The transformation of Conor Coady is particularly noteworthy – Coady, now a superb centre-half, was a midfielder and occasional right-back when Nuno arrived – and the past year has seen great strides made by Adama Traore, once as predictable as a wasp on speed.

But a leap into the top four is more likely to come from a foray into the transfer market, where Fosun have proved they have deep pockets for the right players. Fabio Silva has arrived for a club-record fee, but the 18-year-old is one for the future more than the here and now.

It's clear that Wolves have the right people in the right places. However, breaking the Premier League’s high ceiling is the biggest challenge of all.