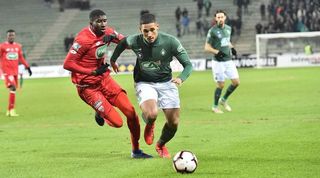 Arsenal have included William Saliba in their Premier League squad despite the fact that the defender is spending the season on loan at Saint-Etienne.

But although Saliba is currently playing his football in a completely different country, Arsenal are still opting to include him in their 49-man group for the campaign.

This is not an oversight by the club's administrators, however, but rather an astute move which could benefit the Gunners going forward.

Premier League sides must submit a 25-man squad each season, of which a maximum of 17 can be non-homegrown players.

Top-flight clubs are also entitled to register an unlimited number of players under the age of 21.

Homegrown players don't necessarily have to be English, but they must have spent at least three seasons with an English team before turning 21 – which means Saliba will be defined as homegrown if he's registered by Arsenal in the next two campaigns. Effectively, a year earlier than hoped.

No, really, Granit Xhaka is underrated – Arsenal just need to help him eradicate the errors

Neymar and the Toiss: meet the controlling circle of friends that influence his every move

Why I hate VAR (and always will)