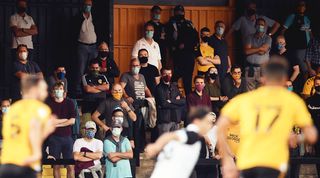 The biggest crowd in the 2019/20 English season watched Phil Foden win man of the match and Sergio Aguero score. Perhaps their counterparts for the 2020/21 campaign saw Tom Knowles score his second goal for Cambridge and Lewis Simper make his senior debut.

There were 862 at the Abbey Stadium on Tuesday to see Cambridge beat Fulham Under-21s in the EFL Trophy. Plans to use Saturday’s match against Carlisle as a pilot event to get fans back had to be abandoned on Thursday. So the midweek gate stands alone, even if it falls far short of the 82,145 who were at March’s Carabao Cup final, or the palindromic 73,737 - the most at a club ground - who witnessed Manchester United’s draw with Liverpool. Or even the 2,500 Brighton accommodated for a friendly a few weeks ago.

Cambridge, used to topping university league tables, may instead find themselves with the largest crowd for a men’s competitive game, by a process of default. They may remain the only club to play in front of their public this season. The governmental predictions of six months of semi-lockdown, or worse, set the scene for England’s longest, bleakest winter. Certainly, it looks like being English football’s worst. Clubs seem set to be denied the oxygen of support and the resources to keep going.

PL PREVIEW Every club assessed ahead of the new season

It feels a miracle that only Wigan Atletic have gone into administration so far – and even then, due to ridiculously atrocious ownership, rather than playing the last nine games of their campaign in empty stadia – but how, realistically, do League One and League Two clubs, no matter how well run they are, continue when they are staring into the abyss of a future without any matchday revenue?

If the Premier League has far greater alternative income, courtesy of broadcast and commercial funds, it is nevertheless hugely worrying that an entire season behind closed doors will cost the division £547 million, according to its chief executive Richard Masters. Arsenal, who announced 55 redundancies, could merely be the trendsetters.

In many walks of life, millions are losing their jobs and businesses through no fault of their own. Those who require people to attend in person are especially vulnerable at the moment – and will be still more so when furlough schemes end, prematurely and dangerously.

Many find their best-laid plans rendered irrelevant by a combination of coronavirus and the U-turns, mixed messaging and panicking of the hideously incompetent British government. The idea that some crowds could come back on 1 October now seems another broken promise. Even before then, Daniel Levy was reportedly looking at ways to get Tottenham’s supposedly lucrative executive boxes at least semi-full and Manchester United apparently trying to get 12,000 fans to attend their game against Crystal Palace but every club, at every level, will have been examining ideas of how to accommodate at least some supporters.

It is not merely about rewarding loyalty. They have a financial duty to do so. Instead, the season tickets that were sold, predicated on the assumption grounds could be semi-full for at least some games, may have to be refunded in full.

There are plenty of easy gags about it being easy to observe social distancing at various clubs, whose homes are rarely packed, but there is a valid argument that it could be feasible and safer than many other aspects of life. Now rules about gatherings of over six people being illegal suggest empty stadia will reflect an ever emptier existence.

And, at some point, there needs to be a discussion if the damage of a lost winter can ever be repaired, if the price is too great or if there is an alternative way. There is an economic cost of destroying businesses and industries and a societal cost of destroying institutions, which football clubs are, and which is getting overlooked.

If the opening week of a league season should be a time of optimism, now it is one of pessimism.