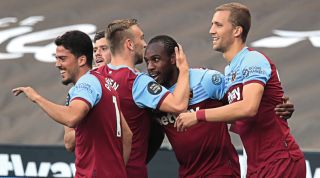 So can West Ham punch above their weight? No, in short. The extended version? God, no.

With the terms of the London Stadium deal meaning that any sale of the club before 2023 requires a payment to the public purse, West Ham fans remain in a curious purgatory: stuck with owners whose long-term strategies are constantly questioned, resulting in a club that has finished above 10th only once since 2012-13.

In 2020-21, simply avoiding relegation again will represent a job well done by David Moyes. At a time when Liverpool’s Premier League triumph should usher in a new era of analytics and data-driven decision-making, West Ham are still suspiciously eyeing their microfiche machine in the corner.

The current squad was assembled by four managers, two heads of recruitment, David Sullivan and the phalanx of agents who serve as the club’s scouts – and still someone thought that signing Jack Wilshere was a good idea.

Viewed through that prism, it’s no wonder the squad remains so heroically incapable of playing with a scintilla of consistency. Supporters of other clubs will be familiar with the wreckage of West Ham’s stadium move, but they may not know about the structural damage elsewhere.

Sky Sports mentioned the cheapness of the club’s training ground and were forced to issue a grovelling apology, admitting that the investment amounted, in fact, to £10m. Leicester, meanwhile, are spending £100m on theirs and will move into it this summer.

FEATURE Why can't West Ham be a quieter football club?

Believe it or not, the glimmer of hope is Moyes. While he remains unpopular with a vocal subset of supporters – the Scot is symbolic of the mediocrity they were promised was behind them when leaving Upton Park – he is the only person in any capacity at the club who has experience of delivering success for a team such as West Ham.

It was a while ago, but it’s there, and the astute purchases of Tomas Soucek and Jarrod Bowen suggest he is at least improving a recruitment policy which had seemingly involved picking players from a 2012 Panini sticker album. Selling Grady Diangana, a decision made by those above the manager, was somewhat puzzling.

Moyes has been fairly mediocre since returning, which has been a tremendous improvement. His second spell put West Ham 13th in the Premier League form table.

Given time, his diligence could perhaps solidify the Irons as mid-table regulars – though it remains to be seen whether this will suit owners who promised a whole lot more than that.