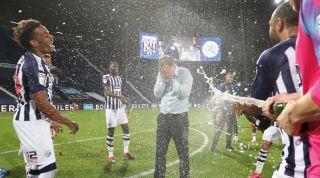 The promotion-induced hangovers have gone. The next headache is how West Bromwich Albion will survive in the Premier League in 2020-21.

While it’s pertinent to ask whether Bilic can ensure that the Baggies remain bouncing, the more pressing question is how far his club will go to help him with recruitment. Their messaging suggests they will follow a model closer to Sheffield United than to Aston Villa. In other words: over to you, Slav.

Much has changed since Albion last started a Premier League campaign. In 2017-18, they spent a relatively large sum on transfers, only to endure a season of upheaval and eventual relegation. Mark Jenkins, the right-hand man of former Baggies owner Jeremy Peace, returned as chief executive in the final throes of that campaign, appointing Luke Dowling to take on player recruitment.

Jenkins has left again this summer, but his replacement Xu Ke is unlikely to break the bank for new arrivals. Grady Diangana is a smart signing and Matheus Pereira has made his loan move permanent, but there are still holes in the squad.

Areas of concern lie at both ends of the pitch. Bilic’s rotation of Kyle Bartley and Ahmed Hegazi alongside Semi Ajayi in central defence suggests he has little confidence in either, while left-back Kieran Gibbs is injury-prone and talented teenager Nathan Ferguson has departed for Crystal Palace.

Up top, the Croatian opted for one central striker from a pool of Charlie Austin, Hal Robson-Kanu and Kenneth Zohore, and not one presented a strong case for being a regular frontman at Premier League level.

Zohore – an £8m summer signing – started four league matches in August and just one after that, and by July he wasn’t even in the 20-man matchday squad. Robson-Kanu struggled after the restart. Austin chipped in with key goals but his form and fitness were sporadic.

When crunch time came, Bilic looked frenzied on the touchline. Albion’s promotion was less a dynamic burst over the line than a fumble for second place, gifted to them by Brentford – the Baggies themselves didn’t win any of their last four matches.

After defeat at Huddersfield, Bilic admitted, “We crumbled under the pressure,” adding, “We’ll be ready for play-offs”.

But now a new phase begins. The only aim: survival. With spending at a premium, the onus will fall heavily on Dowling’s recruitment and Bilic’s ability to shape a side fit for sustained Premier League football. Those two factors will decide whether the Baggies stay up.

FEATURE Revealed! Which teams have the easiest – and hardest – starts to the 2020/21 Premier League season?