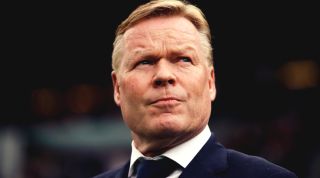 Alphonso Davies picks up the ball. He effortlessly sidesteps past Leo Messi and Arturo Vidal, both 13 years his senior. He threatens to motor off into the box, but instead, the Canadian heads wide to toy with Nelson Semedo on a patch of the pitch that he’s made his own post-lockdown.

It’s embarrassing for Semedo, who’s simply trying not to be nutmegged. Davies accelerates free, dances past Gerard Pique and tees up Joshua Kimmich for Bayern Munich to lead Barcelona 5-2. It's astounding. And not just for Davies's quality.

Quique Setien watches on with an expression of despair, jealousy and angst. He must know that he’s watching a remorseless scythe swing for him. And perhaps even he knows the cold fact of the situation himself: he’s kind of unlucky to be sacked from Barcelona.

It leaves new boss Ronald Koeman with an impossible task. The ginger genius is an astute manager; he was excellent at Southampton, unlucky, really, at Everton, but Camp Nou is in chaos.

The 8-2 had been coming. Maybe not like this, but really, a disaster of this magnitude was only around the corner after successive calamities against Roma and Liverpool. The club is a mess on and off the field. The motto, “More than a club” is plastered over the seats on the side of the stadium that never sees shade: and yet, Barcelona are nothing special anymore.

"He's just turned Nelson Semedo inside out! An experienced right-back... Whoops!"Wow, Alphonso Davies is just so difficult to stop 🔥A magnificent assist from Bayern's rising star at left-back 🙌#Club2020 pic.twitter.com/NCbOrOyaJSAugust 14, 2020

The slow, grinding halt of famed academy La Masia is not just symbolic, but the start of where it all went wrong. Following the youth-poaching scandal of a few years ago, Barça haemorrhaged gems from their famed conveyor belt. Dozens of potential superstars had slipped through their net - both overseas players forced to leave and local lads who weren’t given adequate chances.

You could pick an XI of players who left, while Riqui Puig, Ansu Fati and Carles Alena still battle for spots in the first team. Sergio Gomez, Sergi Canos, Eric Garcia, Adama Traore, Adrian Bernabe, Marc Cucurella, Mateu Morey, David Navarro and most notably Takefusa Kubo – sent back to Tokyo after the scandal and snapped up by Real Madrid, as soon as he turned 18.

Kubo is not the irony though: the irony is in the diversity that La Masia was breeding. Players not just from the concrete of Catalonia but Senegal and South Korea were given the same home at the Barca academy; diversity that they desperately lack on the field now.

And so it’s led to bad signings. Signings that Ronald Koeman alone will not have the power to veto. Signings that are keeping youngsters from the first team, too, meaning that Sergio Busquets – 32 last month – is still the last big academy grad regularly in the side.

This is a club that signed Antoine Griezmann last summer for over £100m. That was not long after they’d brought in Phillippe Coutinho for a similar sum of money. Both are players who want the ball at their feet. So does Frenkie De Jong, who was similarly brought in for sentimental reasons.

Who's there to stretch play and make a run in this team? Does that not fit into Barcelona's ideals? And why on Earth have they essentially swapped Artur Melo for an older player in Miralem Pjanic? Is it literally just about aesthetics and “Barça DNA”?

BARCELONA The inside story of the death of La Masia

It would go some way to explain why Quique Setien got the Barca job and talked up the value of Johan Cruyff and Lionel Messi, rather than referring to his CV, upon his unveiling. It would explain too why Koeman – a Barça legend under Cruyff – got the job in a rumoured shortlist featuring Xavi, Thierry Henry and Arsene Wenger. Four men famed for their roles in beautiful footballing sides: one is all but retired, the other two have barely started management, leaving Koeman as the experienced man in a field narrower than the Blaugrana's attacking shape.

BREAKING: Ronald Koeman has been announced as the new Barcelona manager 🚨 Here he is scoring an extra time free kick in the final to win Barça their first European Cup in 1992 pic.twitter.com/YySfNPYBR0August 19, 2020

So here’s another dose of irony. It was never Pep Guardiola’s intention to play beautiful football. He never wanted to bewitch and bewilder: he has always been a born winner first and foremost. Sure, his Barça side was astounding to watch – but that was nothing more than a side-effect of his football. Neither was it Frank Rijkaard’s goal to dazzle. That side boasted Ronaldinho, of course, but boy did they grind out that 2006 Champions League final. It's not just about style, but steel.

Johan Cruyff knew it all too well. He learned from English coaches in the late 1950s that keeping the ball stopped the opposition from putting it in your net. Yes, it was stylish. But at its heart, pragmatic.

Whatever happens now, perhaps president Josep Bartomeu should remember that. “The Barça way” is no longer unique: it is not a get out of jail free card. It is not an overarching policy with which to recruit, hire and fire. The truth is that every club wants to play good football with youth products, and plenty are doing it better than Barcelona – just as Bayern Munich and Alphonso Davies proved last Friday.