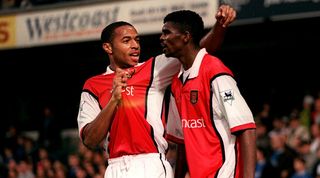 Arsenal take on Chelsea this weekend in the F Cup, in front of a packed out – sorry, no – in front of an empty Wembley.

The cross-London rivalry seems to have grown over recent decades, with Premier League-winning managers Arsene Wenger and Jose Mourinho regularly butting heads on the touchline.

The fixture has thrown up some classics over the years, including some other FA Cup final days...

WANT TO WATCH THE GAME? Check out our how to watch page on Saturday to find out how to find a cheap Arsenal vs Chelsea stream

Chelsea and Arsenal headed into an FA Cup final showdown at Wembley in 2017, with Antonio Conte’s side having just won the title at a canter; Arsene Wenger’s side, however, had finished outside the top four for the first time in decades.

The Blues were strong favourites, thanks in part to a peculiar Arsenal line-up which saw Alex Oxlade-Chamberlain at left wing-back, Rob Holding replace the suspended Laurent Koscielny in the back three, David Ospina in place of former Chelsea legend Petr Cech and Per Mertesacker making his first start in an injury-ravaged season.

As far as FA Cup shocks go, this isn’t the biggest - but it’s one of Arsenal fans’ favourite finals of their 13 Cup wins. Mertesacker was magnificent against Diego Costa all afternoon, with Aaron Ramsey notching his second final-winning goal.

Arsenal's unbeaten title-winning team of 2003/04 will forever be remembered, but that achievement could have been old news had Chelsea not beaten the Gunners in February 1991, which proved to be their only defeat of the season as they won the title by seven points.

In a tight match, Chelsea seized control in the second half thanks largely to Nigel Winterburn's torrid day. The left-back went on to manage his finest hour in the fixture six years later (more on that later), but this time around he cost his side dear.

His wayward header allowed Kerry Dixon to head into an almost unguarded net, and soon after the former Wimbledon defender inexplicably followed the ball to the opposite side of the pitch, leaving Graham Stuart completely unmarked at the back post for the simplest of tap-ins. Alan Smith’s clinical effort pulled one back but it was too little too late: invincibility would have to wait.

RECOMMENDED Arsenal's almost-Invincibles: When Chelsea denied the Gunners history in '91

Not so much a great game – because there was only one team in it – but important for what it represented. Arsenal fans didn't know it at the time, but they were still four years away from Arsene Wenger's departure as the Frenchman 'celebrated' his 1,000th game as Gunners boss at Stamford Bridge.

A farcical 15th-minute red card for Kieran Gibbs – a case of mistaken identity with Alex Oxlade-Chamberlain – summed up this dreadful afternoon for Arsenal, who were already two goals down by that point thanks to early goals from Samuel Eto'o and Andre Schurrle. Eden Hazard added a penalty on 17 minutes, and Oscar had the Blues 4-0 up before half-time.

It got worse, of course: Oscar grabbed his second goal with 25 minutes remaining, before Mohamed Salah (remember him?) compounded the misery shortly afterwards. It was Jose Mourinho's biggest Premier League victory as Chelsea manager.

"It was a nightmare and I take full responsibility for it," an ashen-faced Wenger murmured post-match.

Parlour was hardly a goal-getting midfielder – 22 in 400 league appearances says as much – but the Barking-born favourite produced a fine effort to elude Cudicini and give the Gunners the lead with 20 minutes remaining.

His goal won't be forgotten, but Parlour was outshone by Freddie Ljungberg for Arsenal's second after the Swede dribbled from inside his own half, left John Terry on his backside and bent a sumptuous strike into the far corner to seal the match, trophy and another double for the north Londoners.

It's left-back time again, but this one features less Warwickshire and a bit more Brazil. The thought of a Samba left-back might make most Gunners cover their eyes after the Andre Santos debacle, but another former Corinthians man, Silvinho, was a far more reliable acquisition.

His crowning moment in a brief two-year stay at Highbury was a spectacular equaliser at Stamford Bridge which rescued a late point as Arsenal once again staged a comeback from 2-0 down. Goals either side of the break from Jimmy Floyd Hasselbaink and Gianfranco Zola had put the west Londoners in command, before Thierry Henry halved the deficit 15 minutes from time.

Arsenal couldn’t quite repeat their trick of winning on this occasion but Silvinho did match Winterburn’s heroics, hammering home a ferocious left-footed strike from range to bamboozle Carlo Cudicini and earn Wenger's men a point.

Chelsea had sacked manager Ruud Gullit just days earlier and went into this League Cup semi-final second leg 2-1 down from the first at Highbury.

But the Blues' turmoil mattered not as player-manager Gianluca Vialli masterminded a stunning comeback in his first game in charge, ending Arsenal’s 12-game unbeaten run. It was a match of nine yellow cards, a spectacularly stupid red, and one particularly memorable goal.

Mark Hughes's twist-and-shoot opener got the Blues off to a perfect start, which got even better shortly after half-time when Patrick Vieira earned a second booking for needlessly hauling down Graeme Le Saux. It got worse for Arsenal. Just three minutes later, a stunning long-range strike from Roberto Di Matteo put Chelsea in control, before Dan Petrescu wrapped things up with a smoothly taken goal.

Bergkamp's late consolation was futile. The Gunners crashed out and ultimately missed out on being the first team to claim England's domestic treble, after going on to win the Premier League and FA Cup.

An eight-goal thriller that epitomised both teams' 2011/12 campaigns. Chelsea, under Andre Villas-Boas, struggled with their Portuguese manager's determination to play a high defensive line, something that Robin van Persie exploited – typical in a 30-goal season where he carried the Gunners.

In this game, Arsenal twice came from behind (Andre Santos continued the left-back curse to level things up at 2-2), after Blues goals from Frank Lampard and Terry. However, Juan Mata’s free-kick levelled matters following Theo Walcott's strike 10 minutes after half-time, but as Chelsea chased a winner, Terry's slip allowed Van Persie in on goal and the Dutchman rounded Petr Cech to score with five minutes left. To make matters worse for the hosts, he completed his hat-trick in stoppage time with a thumping shot.

A fine game, but one played between two teams at their weakest for a number of years – Chelsea finished sixth (25 points behind winners Manchester City), while Arsenal clinched third on the final day of the season in a nervy afternoon at The Hawthorns. Luckily for Chelsea, they had the Champions League trophy to comfort them at night.

You’ll notice a strange theme developing over this list of games, and here's the first case in point. Left-backs have influenced this rivalry long before Ashley Cole made his poisonous switch to Stamford Bridge, and Winterburn was among the first of many to come up with an unexpected and vital goal in this fixture.

The long-serving touchline dweller was hardly known for his goalscoring exploits, but for some reason decided to let rip from all of 30 yards in the 88th minute of this classic to-and-froer that was delicately poised at 2-2 after Chelsea goals from Gus Poyet and Gianfranco Zola either side of a Dennis Bergkamp brace. Unbelievably, it found the far top corner and won the game for Arsenal against one of their nearest rivals as they went on to secure the title (and then FA Cup) for the first time under Arsene Wenger.

Nwankwo Kanu is something of a cult figure at every club he has played at, thanks to his unique style and happy-go-lucky nature. However, he cemented a far more valuable legacy with an exquisite 15-minute hat-trick at Stamford Bridge to inspire a famous Gunners comeback from 2-0 down.

Chelsea thought they had the game all sewn up shortly after half-time when Dan Petrescu added to Tore Andre Flo's goal six minutes before the interval. But Arsenal's Nigerian hero had other ideas. His first two goals owed it all to his cunning and delicate touch, but it's his 90th-minute winner that will really live long in the memory.

Even after he'd chased down Albert Ferrer's stray clearance, it seemed the hosts could still cope with the lanky striker. But, dribbling past a stranded Ed de Goey, Kanu whipped the ball over an array of Chelsea defenders into the far top corner from an impossible angle, sending Sky Sports commentator Martin Tyler into a fit of excitement to screech the famous line: “Can you believe it?!”

Another instalment in our left-back series, although this time in Chelsea’s favour. Wayne Bridge’s Blues career wasn’t all that much to shout about, largely due to Ashley Cole’s arrival at Stamford Bridge, but he did get one up on his adversary before ‘welcoming’ him as a team-mate.

In the 2003/04 quarter-finals of the Champions League, this all-Premier League tussle was tied at 2-2 on aggregate with the game heading into extra-time. But Bridge, of all people, won it just minutes from the end, bursting into the box and finding the far corner.

Chelsea were beaten by Monaco at the next stage, but this goes down as Arsenal’s big opportunity missed in their ‘Invincibles’ season, as Jose Mourinho's Porto finished as eventual winners.

FIFA 21 NEWS Everything we know so far