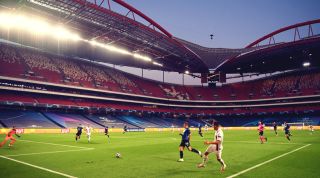 Eight minutes on the clock, 30 stadiums to guess - we're not counting Twickenham and Murrayfield, given that they don't host football.

NOW TRY Quiz! Can you name every Champions League semi-finalist since 1994?

Here's one for a trivia quiz near you - the biggest stadium in the world is the Rungrado 1st of May Stadium, also known as the May Day Stadium in North Korea. It's unlikely though that the Champions League final will be held there anytime soon.

No - that's going to a lovely ground in Lisbon on Sunday. But we won't say which one - that's for you to guess. Let's face it though. It doesn't really matter where the Champions League is held, since no one is going to be there to see it.

Today, we'd like you to name the biggest stadiums in Europe. Surprisingly, none of them crack the top ten in the world.

Most of the biggest stadiums in the world are in the United States, with the second biggest being the Sardar Patel Stadium in India. Can you name Europe's top 30, though?