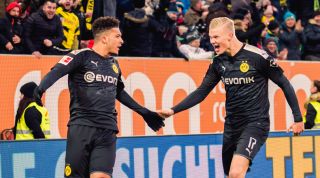 You have five minutes to guess 20 youngsters.

THEN TRY Quiz! Can you name the Chelsea vs Tottenham line-ups from 2016?

Last season, Harvey Elliott became the youngest ever footballer in the Premier League, at the tender age of 16 years and 30 days.

The now-Liverpool wide-man is younger than Girls Aloud. He is younger than the Congestion Charge; he had probably not uttered his first words when Roman Abramovich bought Chelsea. The first Olympic games he remembers will be Beijing in 2008. He probably has no recollection of watching the Golden Generation of England.

This is quite astounding if you're of a certain age. Young Harvey hasn't quite done enough to become one of the most valuable players in the world, but hey - time is very much on his side.

Can you guess the 20 youngsters who absolutely have made the cut?