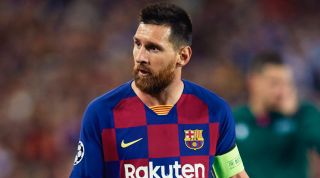 NOW TRY Quiz! Can you get 50 correct answers in our Lionel Messi or Cristiano Ronaldo quiz?

Once upon a time, on a dark night, somewhere in Argentina, Diego Maradona handed Lionel Messi a football underneath the moonlight, passing the baton over to the young pretender (probably).

From there, Leo has won four Champions League titles. He's won the Ballon d'Or six times and written his name in history as the best footballer who ever lived - or the second-best, depending on who you ask.

We were wondering whether Raheem Sterling would become his teammate - to FFT's knowledge, Messi's never had an English colleague - but it turns out it's more of the same this season.

But for now, let's look back at some of the footballers that have helped him to where he is today. We're looking for the 30 players who have appeared on a pitch with the Argentinian the most number of times.