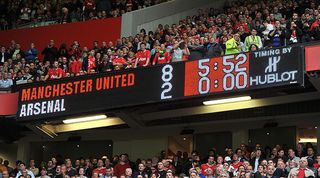 Ole Gunnar Solskjaer has admitted that it’s far from ideal having a child (well, until tomorrow at least) as his only striker option going into this game against the Gunners, with both Anthony Martial and Marcus Rashford unlikely to make it through injury. Godspeed, Mason Greenwood.

QUIZ! Can you name Manchester United's last 50 goalscorers in all competitions?

Certainly, this is a far cry from United under Fergie. This wasn’t actually an exceptional Red Devils team on paper, we must say, but they enjoyed an exceptional afternoon against a hapless, largely inexperienced Gunners team stuck together with string and Blue Tack.

By the season’s end, these two sides were only one place apart in the table – albeit separated by a whopping 19 points. Manchester United lost out to City in the title fight, while Arsenal edged out Spurs to finish third and claim 2011/12’s final Champions League place (thanks to Chelsea’s victory in Munich).

For today’s quiz, we’d like you to name every player who featured in this game. Fittingly, we’re giving you eight minutes to get as many of them as you can and then marvel at how this match, with these players, ever happened in the first place.

We’d love if it you told us your scores @FourFourTwo – retweets are up for grabs if you don’t give spoilers away. When you’re done, pass it onto an Arsenal fan you dislike.

QUIZ! Can you name the top three Premier League scorers for every season?

WATCHPremier League live stream 2019/20: how to watch every game from anywhere in the world