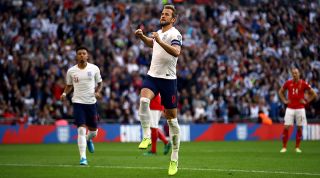 There's generally plenty of debate about who should skipper England, but Harry Kane is one rare example of a unanimous choice. Even Arsenal fans would agree that the Tottenham man leads by example, as he demonstrated with his second Three Lions hat-trick against Bulgaria on Saturday evening.

But can you name him and his 19 predecessors? We'll give you a clue: this one goes back to mid-2005.

One note before you start: the FA keep a record of official England captains - those who lead the senior team out in a full match. Unfortunately, just picking up the armband after the captain is subbed off, strapping it on and running off pumping your fist doesn’t count. For shame.

Anyway, we’re giving you five minutes to name the last players to officially skipper England, based on their position and total caps as captain. Let us know how you do @FourFourTwo – and challenge some pals while you’re at it.

QUIZ! Can you name the last 50 English scorers in the Premier League?