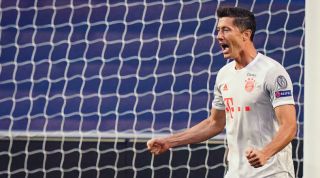 You have four minutes to guess the top scorer from the last 20 seasons.

THEN TRY Quiz! Can you name every Champions League semi-finalist since 1994?

The Champions League is where stars are born - hence the logo. But over the last twenty years, only a few footballers have nicked the top scorer of the competition.

Tonight, Robert Lewandowski's not just looking to send his side to the final of the tournament - he's looking to join the ranks of top scorers

We all remember the key goals later on in the tournament, but it's easy to overlook who's actually scoring the most goals - given that so many of them can come in the group stages of the competition.

Today, we're looking for the players who've reached that top-scoring figure every year since the turn of the cenutry.

BARCELONA How did Barcelona's academy lead to a club in crisis? The inside story of the death of La Masia