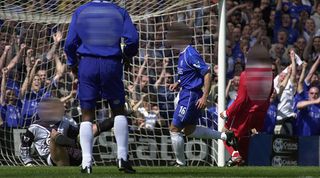 Chelsea vs Liverpool has lost a bit of its needle since the two clubs effectively swapped places in English football’s pecking order, although if we’re being honest, it was mainly after Jose Mourinho left Stamford Bridge and took his little gilet elsewhere.

From Luis Garcia’s ghost goal to Demba Ba and Slippy G, this fixture has thrown up some fine entertainment over the years – and for today’s quiz, we’re taking you back through the decades for a pair of 2-0 Blues wins.

We’re looking for the men who featured in either game at Stamford Bridge from 10 and 20 years ago respectively – so anyone in a starting XI or who came off the bench. We’ll warn you now: it’s a tough one, which is why we’re giving you 12 minutes to name as many as you can.

Tell us how you do @FourFourTwo and we’ll retweet some of your scores, provided you don’t give answers away. Good luck, you’ll need it…

QUIZ Can you name the 50 Real Madrid players with the most Champions League appearances?

WATCHPremier League live stream 2019/20: how to watch every game from anywhere in the world