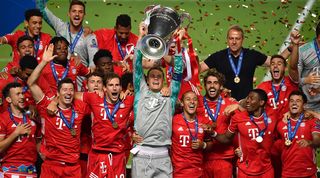 Six minutes on the clock, 33 clubs to guess.

NOW TRY Quiz! Can you guess 50 correct answers in our Bayern Munich or Paris Saint-Germain quiz?

That's not so much an inditement of Bayern Munich for leaving it so long - so much as a compliment to how the Canadian left-back has risen to being such a great player at such a young age. And he's not alone.

This Bayern side are indisputably the best in Europe. Just look at the squad depth - who can afford to leave Philippe Coutinho on the bench? It's arguable too that young Alphonso is keeping two of the top five left-backs on Earth out of their favoured position, in David Alaba and Lucas Hernandez.

Some of these Bayern players have been around Europe - some at top European sides, some at smaller clubs. Can you remember who Die Roten picked their Champions League-winning stars from?