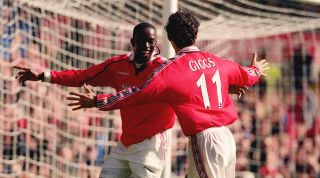 10 minutes on the clock, 50 players to guess

NOW TRY Quiz! Can you name every club Gareth Bale has ever scored against?

As one of only six teams that have played in every single Premier League season, Manchester United and their players have racked up the matches in England's top flight since 1992/93.

We're fairly certain that one Welsh winger, in particular, is probably still match-fit for games this season, having featured in an incredible 632 of these matches for the Red Devils.

And that's not even counting the ones he played in before football was invented. A fairly easy answer below, we'd imagine, but it gets a bit trickier as you go on.

United fans will be pleased to see the appearances of some current fledglings in this quiz. It looks like that long-standing record of including academy players in the matchday squad looks likely to continue as long as Ole has anything to do with it.

While you’re here, why not subscribe to the mag - and get every issue delivered to your door!