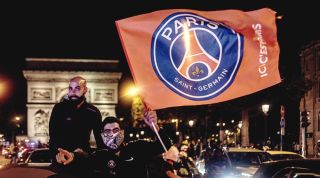 In 1993, Olympique Marseille went boldly where no French club had ever been before by lifting a rebranded European Cup. It was the first Champions League of the modern era and it was supposed to be a new dawn for French football.

Marseille, led by a chain-smoking pioneer of zonal marking Raymond Goethals, were genuinely innovative and fun. It was a parallel to Paris Saint-Germain of today: exciting young players, an innovative manager and a sweeping, intelligent style of play. Vitally, their charismatic president Bernard Tapie - a politician in the French government - was prepared to do anything to make Marseille great.

And that, precisely, led to the biggest scandal in French footballing history.

When Valenciennes players admitted to receiving bribes from Tapie, it toppled an empire at its peak. Marseille had won four Ligue 1 titles; the last one was stripped, while their Champions League win is still tainted by rumours of cheating. It’s a tragedy, really, that a country which produced such incredible talent in the 1990s had its domestic league stained by corruption. Who knows what a French side could have achieved in Europe otherwise?

Because Marseille’s win lifted France as a whole, too. L’OM were something to be proud of. Yet Tapie’s willingness to cheat in sport asked questions about what he was capable of doing in government, plunging the football and politics into further muddy waters.

GERMANY Would RB Leipzig winning the Champions League be good for football?

“People were already cynical about politics,” political scientist Alain Duhamel claimed in 1993, “But soccer was considered a sanctified domain.”

Ever since Marseille cheated, French football’s relationship with politics has been curious; one can't exist without the other. The late-90s vision for a modern, multicultural France was projected onto the ethnically-diverse national side. President Jacques Chirac made sure to piggy-back onto Les Bleus’ 1998 Coupe De Monde triumph; so much so, that he even asked Zinedine Zidane to publicly back him in an election against far-right candidate Jean-Marie Le Pen.

These days, however, a post-COVID French society could do with a boost from the game. Footballing power is in the capital, with Paris Saint-Germain lifting all but one title since 2012. The World Cup triumph in 2018 united a country which has been through 20 years of civil unrest and social tensions - mirrored by Les Bleus' own controversies too, from squad walkouts to Laurent Blanc's alleged racism. France came full circle at the 2017 election, in which Zizou spoke out against Le Pen’s daughter and successor as the far-right candidate, Marine. So now would be a good time for the country to put politics aside and triumph again in on the pitch.

The only problem is that Les Parisiens are not very popular.

PSG are turning it 🔛Angel Di Maria doubles their lead after capitalising on a goalkeeping error! 🎯THAT Neymar assist 🤤#Club2020 pic.twitter.com/fO3jABr1FHAugust 18, 2020

As long ago as 2013, PSG were topping a L’Equipe survey as France’s most hated club. Ligue 1 was the only one of Europe’s top five leagues to null and void their season: many believed this was done to benefit PSG over their rivals, with Lyon the big losers, missing out on European football for the first time since 1996. L’Equipe called the cancellation an “extremely questionable political decision”, while Lyon President Jean-Michel Aulas threatened high court action. It’s still controversial.

EUROPEAN FOOTBALL The riddle of Romelu Lukaku: a story of one of the greatest debut seasons Inter Milan have ever seen

Even without owners QSI ploughing money into the side, it’s easy to see why dislike of PSG is common. Lyon and Saint-Etienne aside, there are few big local derbies in France, with most fans hating on the big team (like we all do in England, but amplified). Many born in the capital identify as Parisien first, French second, which riles the rest of the country.

Now factor in the human rights atrocities of Qatar, plus PSG buying huge and slowly erasing their own identity, to the point where even some die-hard PSG fans feel like the Parc des Princes has been gentrified. It’s 27 years since a French side last won the Champions League, but if Thomas Tuchel’s side follows in the footsteps of Raymond Goethals’s, it’s not likely to be widely celebrated across the land this time.

With minimal Les Bleus stars in the side, too, it’s not as if there are national heroes to latch onto: this will be Qatar’s triumph, Thiago Silva’s swansong, Neymar justifying his career choices and a German manager’s masterpiece. The fans played no part in this one in the stadium.

That being said, there's always hope. Hope that should the French side lift the cold silver handles of the trophy on Sunday, that this could usher in a better time for the game across the channel. More eyes on French sides couldn't be a bad thing and though PSG have the monopoly in Ligue 1, boasting Champions League winners is a huge pull for the division. Unlike Marseille, the European champions - you'd expect - would not be forcibly relegated for cheating.

Domestic French football was robbed of its glory years in the 1990s through corruption. Now, the French superpower of an era - however unpleasant they may be behind the scenes - has the chance to win a Champions League without rumours of bribery and match-fixing.

France has waited a long time for this. Even if a PSG win wouldn’t feel like a win for all.