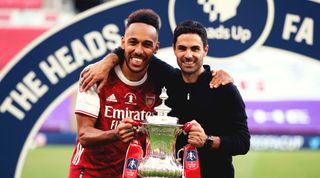 Time will tell how high Mikel Arteta’s ceiling as a coach reaches, but he has modernised Arsenal’s approach already.

It’s about more than the FA Cup. The Spaniard has dragged this team into the 2020s with his cultural reset of a club that had become too indulgent. He has created a long-awaited culture of accountability in north London by sidelining those whose application wavers. Crucially, he also welcomes players back into the fold if they correct their attitude.

Although a great deal of power in football may have devolved away from coaches and into the hands of overarching, besuited hierarchies, Europe’s best teams have very identifiable figureheads in the hotseat.

While Arteta is some way off matching the achievements of Messrs Guardiola, Klopp and Zidane, he has the charisma to become that figurehead for Arsenal. Talk of “non-negotiables” quickly won over fans and it seems he has the players’ buy-in, too. Most of them, anyway – the others won’t last long.

Arteta’s tactical approach is also refreshingly modern. Fluid, bright and adaptable, it is based on the Marcelo Bielsa-inspired principles so beloved by Pep Guardiola, the man Arteta spent three and a half years under as assistant coach at Manchester City. There has been a focus on positional play and effective pressing, both of which improved Arsenal after the former midfielder’s arrival last December.

Nobody is under any illusion about the size of Arteta’s task, but there is confidence that Arsenal now have a project manager capable of overseeing the club’s transition from the long Arsene Wenger era. Arteta immediately got to work on the Gunners’ defence, and he significantly tightened up a porous backline, though their attack is still open to further improvement under the 38-year-old’s tutelage.

The question many Arsenal fans are grappling with is whether the club’s executive branch will hand him the tools required for a necessary squad overhaul.

At Manchester City and Barcelona, Guardiola started work at a club already carved into his image; Bayern Munich’s culture was a little less malleable, but they still offered him significant resources.

Arsenal can’t do this, so they’ll have to be clever in how they provide their manager with ammunition. Fans, however, aren’t sure that Arteta, Vinai Venkatesham and Edu can outsmart the market and give Arteta the fighting chance he has emphatically earned.