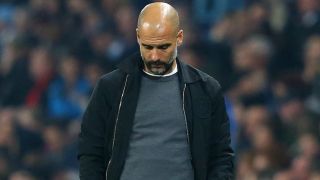 Ceding so much ground to Liverpool was clearly Manchester City’s major failing last season, but of greater concern to Pep Guardiola will be how far they’ve fallen behind their former selves.

In previous campaigns, City earned cool nicknames like the ‘Fourmidables’ and ‘Centurions’, such was their unparalleled dominance. Now, they’re playing catch-up. At times, they’re a pale imitation of a team that, not long ago, raised the bar for English football.

There are mitigating circumstances for the drop-off – mainly, the long-term losses of Aymeric Laporte and the now-departed Leroy Sané, which each proved

so costly. And, in hindsight, it was an impossible feat to maintain skyscraping brilliance for a third straight year. But as for their decision not to replace Vincent Kompany... well, that’s on the club.

Even so, all of the evidence points to Manchester City looking a bit frail and a bit stale. Imperious on their day, they can dish out a thrashing seemingly at will – last term, City won by five or more goals seven times in the league alone. Yet they also lost nearly
a quarter of their games. Great teams don’t do that.

This leads us to the fascinating proposition of Guardiola having to rebuild one of his own creations, for arguably the first time in his managerial career. It’s a challenge aided by the recent relaxation of Financial Fair Play regulations, while the judgement of CAS to overturn a two-year European ban means City can still lure the finest talent.

Attacking midfielder Ferran Torres, the best of his generation of Spain Under-21 starlets, is a sign of things to come.

PEP TALK Is Pep Guardiola holding Manchester City back in the Champions League? How his biggest weakness is linked to his greatest strength

It’s not too difficult to pinpoint whose futures are most in jeopardy. Nicolas Otamendi is too often a reckless liability, especially when isolated in one-on-one situations, while John Stones’ fitness issues persist. The early swoop for Bournemouth’s Nathan Aké is one of two centre-back deals the club are desperate to make. City’s left-back conundrum also needs addressing, after aeons of making do.

Newcomers will upgrade a rearguard that can be baffling. On one hand, it kept more clean sheets than anyone else in 2019-20. On the other, it’s a genuine problem and too easily undone by swift counters.

A hefty shopping spree is not the only cause for encouragement. The continued development of local boy Phil Foden offers enormous hope, as Manchester City strive to go back to the future in their continued search for footballing nirvana.