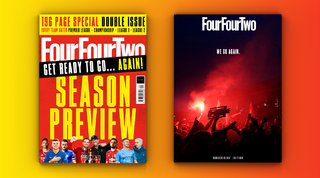 The 196-page FourFourTwo Season Preview 2020/21 special double issue is on sale in shops and online now. Subscribe to the magazine now and get each issue for less than £3.80

Wait: haven’t they only just finished? The confetti has barely been cleared up at Anfield, yet here we are again, locked and loaded to go once more. That's right, the Premier League is back on Saturday, September 12.

Last term turned out to be the top tier’s strangest, most affected campaign since Britain was blighted by 1962/63’s big freeze. It took 11 months of madness to complete, punctuated by a global pandemic and postponements – but as we stumbled to the finish line, a number of things became clear.

Liverpool, who had chiselled a 23-point chasm between themselves and Manchester City by the time their title was confirmed, are right among the all-time great Premier League sides. Reducing the gap behind Jurgen Klopp’s mob won’t be easy, but sustaining such excellence for a third straight season will be no mean feat for the Reds either.

Manchester City’s pitiful title defence will have bruised egos at Eastlands, and Pep Guardiola’s men should improve vastly. Aymeric Laporte was much missed last season but has since returned, while the Blues also made sure to swoop early for Nathan Aké and Valencia’s highly-rated winger Ferran Torres.

Manchester United and Chelsea should both have more of a say this time, though, with a pair of club legends rebuilding nicely. United were reinvigorated after landing Bruno Fernandes in January, and will hope that a fine 13-match unbeaten run to end 2019/20 serves as the precursor to a genuine title challenge. At Stamford Bridge, Chelsea have signed headliners of their own in Timo Werner and Hakim Ziyech, bolstering a frightening frontline that also includes Christian Pulisic.

Arsenal are also quietly confident that they are finally heading in the right direction with another fan favourite in charge; Mikel Arteta’s expectations are considerably lower with his threadbare squad, however, despite an impressive FA Cup win. Expectations have been adjusted down the road at Tottenham, too, who are mid-rebuild under Jose Mourinho. His second season is traditionally the one for success... but perhaps not this time. Despite a mixed start in N17, though, it’s hard to ever truly write off the two-time Champions League winner.

Leicester are reeling from their heartbreaking collapse which cost them a Champions League place, but Europe is still on the cards for Brendan Rodgers’ Foxes after another fine season in which they ultimately defied expectations. Taking a leaf from Wolves’ book wouldn’t go amiss: Nuno’s men managed admirably in the Europa last term, having started their season in late July, and will be looking to improve by finishing in the top four this time out.

Below them, Everton and Southampton are most likely to trouble what has now become a top eight. Ralph Hasenhuttl has re-energised the Saints, Carlo Ancelotti is slowly shaping Everton into a hardier team, and both will eye improvements. Sheffield United shocked everyone with their incredible push for Europe last year, but the sophomore season is always the killer and Chris Wilder will need to find new ways of breaking teams down.

A number of clubs are still in flux from tumultuous ends to last season. Newcastle’s Saudi-sponsored takeover collapsed, Crystal Palace endured a dire run of defeats after lockdown, while rumours of Sean Dyche’s unhappiness at Burnley amplified over the summer – sparked by his very public disgruntlement at expiring contracts which forced him to name two goalkeepers on the bench several times.

Brighton, West Ham and Aston Villa, on the other hand, all finished positively. They may have been the trio closest to danger, but a commitment to playing on the front foot and attacking with more fluidity was a welcome change from grinding out precious points every three days. Do they have what it takes to translate that over a full campaign, though?

Then there are the newly promoted sides. Fulham and West Brom know this level well and will wish to make swift amends for past failures, but it’s been 16 years since Leeds were last here. With Marcelo Bielsa about to manage his first full top-flight season for six campaigns, having the Whites back should be a whole lot of fun – not least with a string of famous old rivalries to rekindle. Let’s get ready to rumble...

Starting on Monday, we'll be publishing separate expert previews for each team in the days running up to Saturday's kick-off. Four clubs a day, every morning, in alphabetical order – bookmark this page and see below for the links as each one goes live.