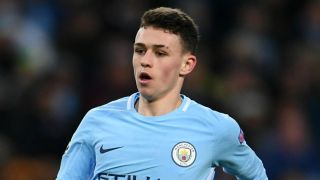 The 2019/20 season may not have been the most successful for Manchester City in terms of silverware, but for one player it was a breakout campaign. Phil Foden, dubbed the 'Stockpot Iniesta' by fans, made 38 appearances for the first team, scoring eight goals, and has just received his first senior England call-up.

Despite reaching some personal milestones, Foden spoke to the Season Preview issue of FourFourTwo – on sale Wednesday, August 26 – about how things need to be better in the coming season.

“We can’t lose it by as many points as we did last season," Foden tells FFT. "It’s not easy to keep winning the Premier League every year. It’s the hardest thing to do, so we’re not too down on ourselves – we still finished second. But we’re going to give it everything we’ve got to come back stronger.”

If City are to reclaim the Premier League title this season, they'll need to do it without talisman David Silva, a player who made more than 400 appearances since joining the club in 2011.

If there wasn't already enough pressure on Foden's young shoulders, coach Pep Guardiola said the club didn’t need to replace the player known as 'Merlin' as long as Foden was on the books.

“It was a big statement," says Foden. "To spend this last year with David has been special for me and I’ve enjoyed it, because of the club legend that he is. But it’s not as easy as just replacing a player like him.

"There are several who can play in that position, such as Bernardo [Silva]. Pep’s always a believer that whoever trains well, he will pick. I’m going to prepare myself as best as I can to be ready – I’d love to be a key player, but it’s going to be difficult because of the standard here. I’m a squad player, so I have to earn that place.”

Foden confirmed his status as a player for the here and now after taking on more responsibility since lockdown. The 20-year-old played a number of different positions towards the end of last season, but insists midfield is where he sees his future.

“I’ve been really happy with my form,” he reflects. “When you score and assist goals, it makes you happy about yourself, and makes you feel that you’re playing well. After coming back from lockdown, I’ve been playing higher up the pitch, on the wing more, so it’s allowed me to get more goals. I’ve been enjoying the new role so far – it’s great when you can play in different positions and do well. I’m a good finisher so I’m trying to repay the manager’s faith by scoring goals. I feel like my preferred position is still in midfield, but I won’t mind playing out wide next season if it happens.”

The FourFourTwo 2020/21 Season Preview issue will be available in shops and online from Wednesday, August 26

FROM THE MAG Louis van Gaal reveals eye-popping list of players he tried to sign at Manchester United – including Neymar, Robert Lewandowski and Sadio Mané