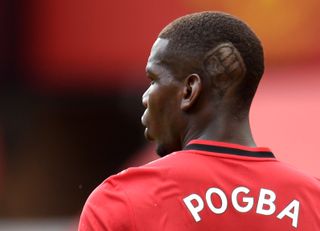 Seven substitute appearances and zero starts wasn’t the breakthrough a young Paul Pogba envisioned at Old Trafford. The French teenager had just starred in Manchester United’s FA Youth Cup triumph in 2011, only to find his path to the first team blocked by Phil Jones and Rafael. Excited fans would have to wait four years to see him back in red and white.

Since re-signing for Manchester United in August 2016, during Mourinho's first summer in charge, Pogba 2.0 at Old Trafford has been like an indie band’s difficult second album – there’s the odd crowd-pleaser in there but overall it’s a moodier record than fans were expecting.

There have been sublime performances - the affronted, swaggering display that stopped Man City’s title celebrations in April 2018 is the classic example - but they've felt sporadic. Meanwhile, there’s also been plenty for fans, managers and Graeme Souness to grumble about along the way.

Like the time Pogba posted an Instagram video of himself laughing in the stands while his team-mates lost a Carabao Cup tie to Derby in September 2019. Then there was the time Pogba’s agent Mino Raiola, a man once labelled a “shit bag” by Sir Alex Ferguson, told The Times Pogba would be leaving to join Real Madrid. There have been suspicions, too, that his recovery periods tend to mysteriously lengthen when the team hits a bumpy patch.

Nevertheless, the notion of a new contract, as touted by Raiola this week, should be cause for optimism at Old Trafford. So much of what Pogba appeared to dislike about being a Manchester United player in the past left along with Mourinho in December 2018. After a dark, tense period at the club, Ole Gunnar Solskjaer’s tenure feels as if a window had been cracked open the morning after a 5am drinking session.

There have been difficult periods under the Norwegian but, at long last, Pogba and the rest of the squad have a coach with a positive, attack-minded philosophy. Nobody feels the need to tread on egg-shells around Solskjaer; a man who would sooner put an arm round his players after a difficult result than throw them under the bus.

Solksjaer’s Manchester United is the closest thing we’ve seen at Old Trafford to the old Juventus side in which Pogba thrived: a 4-3-3 formation, with a midfield composed of two passers alongside a more combative presence. Pogba, back in his favourite left-sided centre-midfield role, is now free to roam and create and toy with opponents at will.

Meanwhile, the January arrival of Bruno Fernandes has not only provided goals, creativity and leadership to a disjointed midfield, but has also deflected the attention away from his midfield partner. Out of the limelight, Pogba got himself fit during the pandemic before playing a key role in United’s late surge into the Champions League places.

"Paul has come in and had a new lease of life,” Rio Ferdinand said on BT Sport after the Pogba and Fernandes's first start together, a crucial win over Sheffield United back in June that set up five straight league victories. “He doesn't feel all the responsibility in terms of the creative aspect now with Fernandes there - I think that was a big burden on him before.'

Their record together has given United fans quiet cause for optimism heading into a new season. With both players on the team sheet, the Red Devils didn’t lose any of their nine remaining Premier League matches after lockdown, taking 21 points from a possible 29.

Raiola, always keen to capitalise on good publicity, has spoken positively about the club for the first time since the player’s honeymoon period at Old Trafford wore off in late 2016.

“Pogba is a key player for Man United,” he said earlier this week.  “They have an important project and he’s 100% included. Man United will not accept any bid this summer to sell him. We’re going to speak about a new contract soon, no stress.”

While the last two words are deliciously ironic from a man who makes a living off causing a scene, this really does feel like a turning point for player and club. A fully committed Pogba in his best position is a different kettle of fish and, injuries permitting, we might finally get to see the World Cup-winning playmaker give his best in red for a full season.

Few players combine intelligence, skill, grace and power quite like a fit Pogba. How many other Premier League midfielders have such a range of weapons to choose from? He can outsmart, outmuscle and outrun you if he chooses and, with Fernandes already up to speed with English football, United now boast a pair of midfielders who could dominate in a way few have since Paul Scholes and Roy Keane hung up their boots.

At a club like United, where talented misfits have often found home, there’s still a belief that Pogba can become an Old Trafford legend. The frustrating second album can be forgiven if we finally get to enjoy the player fans used to dream of when he was still an academy player. Sometimes the comeback album's the best of the lot.